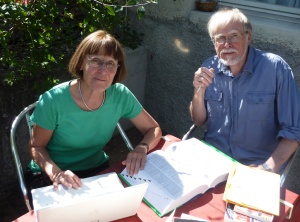 As many of you know, our next readalong, on Wednesday, is dedicated to Erhard von Büren’s novel A Long Blue Monday. Since many of the readers of this blog are interested in the process of translation, I thought it would be great to do an interview with Erhard von Büren’s wife, Helen Wallimann, who is also his translator.

I enjoyed her answers very much and hope you will too.

Without any further ado — let’s welcome Helen Wallimann to the blog.

How did you become a literary translator?

That’s a long story! I was brought up in England by Swiss parents so I was bilingual from the start (English and Schwyzerdütsch, the Swiss-German dialect), and even believed that everyone spoke Schwyzerdütsch at home and English outside the family circle. As my father ran a hotel I knew, too, that different people spoke different kinds of English; so when we were in Lucerne just after the war I taught my little cousins how to get chewing-gum from US soldiers by asking – in what I mistakenly thought was slangy American English – “Any gum chum?”

As soon as I’d learned to read I became an avid reader. This would be useful later on: a translator needs to have an extensive vocabulary, particularly in her own language.

After graduating in French and German from Edinburgh University I worked in publishing in Munich, Paris and London, so I gained a lot of editorial experience. From 1973 to 2001 I was employed as a French and English teacher at the Kantonsschule Solothurn (similar to the old British grammar school), so I was indirectly but practically concerned with comparative linguistics – in fact one of my senior classes made fun of me because apparently one of my favourite sayings was “It’s not quite the same”.

In 1989-90 and again in 2002-03, I spent altogether two years teaching English at Chinese universities. After that I started to attend Chinese classes at the University of Zurich as an “unregistered student”. The second year I was there I attended a seminar on Modern Chinese Poetry. As there were only about half a dozen students in the class I had to take my turn at translating the poems. I was allowed to translate into English instead of German. As I’d retired from teaching I had plenty of free time, so I spent hours trying to produce correct translations in fluent English while preserving the poetic character of the originals. I found that it was something I loved doing. The professor liked my work and subsequently asked if I’d be willing to translate Swiss folk tales for a Chinese-English bilingual translation to be published in Hong Kong (Legends from the Swiss Alps). Later I translated various articles by Chinese artists, art critics and curators for two books on contemporary art in China. I also had the privilege of translating poems by the celebrated Hong Kong writer Leung Ping-kwan for a small book, The Visible and the Invisible: Poems (mccmcreations, Hong Kong),which was published when the poet was awarded an honorary doctorate by the University of Zurich.

After that I thought I might as well have a go at translating the first of the novels by my husband, Erhard von Büren. After all, I do understand German much better than Chinese!

Were there any particular challenges in translating Erhard von Büren?

I think translating literary texts always presents challenges. Take, for example the title of Epitaph for a Working Man, Erhard’s first novel, the story of the last year in an old man’s life as told by his son. The German title, Abdankung, has at least three meanings: resignation, abdication or, in Switzerland, funeral service or funeral oration. It also includes the word Dank (thanks). I found it impossible to translate the word adequately and had to invent a new title. That’s an example of the general problem of vocabulary: there’s often no exactly corresponding word in English, particularly for things like political institutions, traditional activities, food, even types of school – do English, American, Canadian etc. readers of  A Long Blue Monday all know what a Swiss “Gymnasium” is?

In Wasp Days there was an additional problem: each section has its own character, depending on its main theme. So the first section is made up mainly of straightforward narrative, the second one seems like a compendium of random notes and stories, the third is full of ironic description of academic research (here I had to be careful to use the right philosophical, ethnological, sociological, psychological etc. terms); the fourth section is mainly straightforward narrative again, but actually very ironic and funny: the fifth section is mainly made up of conversations; the sixth is more or less a stream of consciousness chapter, it’s also full of lyrical description. Finding the right tone for each section was quite a challenge! 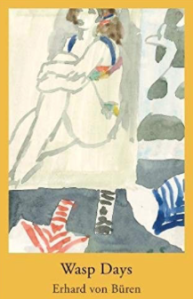 Passages in A Long Blue Monday that were particularly difficult to translate were the lyrical ones that reoccur in the different seasons and describe fields of wheat or barley and the narrator’s mental turmoil as he strides through them.

Could you describe the process of translating A Long Blue Monday?

First of all, you must know that I don’t translate to earn a living. So I can take my time.

Of course I knew the book very well before I started on the translation in the autumn of 2016. So I just started at the beginning and worked through it. By March 2017 I’d completed a first draft which I subsequently sent to a friend in England for her comments. Then I did nothing on the book for a couple of months. The feedback from my friend didn’t arrive until the end of July. But by that time I’d carefully reread my translation and wasn’t at all satisfied with it. So I went through the whole book again with a fine tooth comb, reading the text aloud to make sure all the sentences adequately reflected the meaning and tone of the original, trying out different variants, revising, changing back… It was a slow process. But early in the new year I sent the revised manuscript to another friend in England for her comments. I finally sent the book off to the publishers at the beginning of March 2018.

Were there any passages in A Long Blue Monday where you needed to be creative because the German didn’t translate easily into English?

I’ve already mentioned the lexical problems. But of course there’s also the problem of German grammar and sentence structure: it’s very different from the English, so you just have to be creative if you want to produce a truly fluent translation. By chance I still have a few variations of the opening paragraph of the book. Here’s the German original.

The very first phrase “Wie ich … den Haselweg entlangging” (How I … walked along Haselweg) is a problem for the translator. The German reader probably understands “(When I look back) I see myself walking along Haselweg three or four times a day…” How can you convey this in English without it sounding stilted?

Here are three of my many drafts, the first being a more or less literal translation.

And here is the translation as it appears in the final publication. Note that, for the triple repetition of “wie ich…” – which is an important stylistic element in the original, I used “I’d…” three times.

Three or four times a day, I’d walk along Haselweg as far as the reservoir, a grass-covered mound up near the crossing; I’d turn left down the steep field path to the wood, then skirt the wood as far as the corner above Langendorf; from there I’d take the dirt track between two fields to reach the road that goes up the slope and across to Sagacker Heights.

Do you prefer to translate prose or poetry?

Poetry, really. Because you can spend a lot of time working on a poem: if you spent the same amount on each paragraph of a book, you’d never get to the end.  In general, if I’m not translating, I’m too impatient to reread poems several times, which is something you ought to do if you want to really appreciate a poem. So I get more out of a poem when I try to translate it. Also, it’s very satisfying to feel you might have found an adequate translation. It’s almost as though you’d written the poem yourself.

You are stranded on the proverbial desert island and you are allowed one book to take for translation purposes. Which would it be and why?

I hope it would be a nice Caribbean island and not the kind of island William Golding’s Pincher Martin landed on! Whatever, I’d want a book entitled something like “How to survive on a desert island”. Then, before starting with the translation, I’d search it for useful instructions on things like finding fresh water, opening coconuts, recognising what things are edible, making a fire, fishing, building a hut… And of course how to make signals so that you might be seen by passing ships, airplanes or satellites. Then, if the book proved to be useful but I still hadn’t been rescued, and also provided it gave instructions on how to make writing utensils and paper, I might translate it, just to pass the time. But probably I’d spend my free time writing a diary, hoping it might become a bestseller … if I ever got rescued.

Thank you so much, Helen, for this fascinating insight into your work as a multilingual translator.