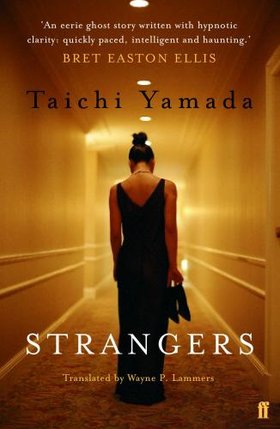 A disconcerting, yet deeply satisfying novel: a wonderful study of grief and isolation, a moving expression of our longing for things we have lost and are unable to have again.

I’ve read about Strangers last year on Novroz’ blog (here is the review) and wanted to read it ever since. It’s a ghost story and as such a perfect choice for Carl’s R.I.P. challenge. But it is also so much more than just a ghost story. It’s a truly wonderful book with a haunting atmosphere, a melancholy depiction of solitude and loneliness with a surprisingly creepy ending.

I often think that the problem some people have with ghost stories is that they take them literally and if they do not believe in the possibility of an afterlife, they do not want to read them. But ghost stories can also be read as purely symbolical. Loneliness, longing and grief can affect a person deeply. Lonely children often start to talk with imaginary friends and also older people can start to talk to themselves which is actually rather a conversation with someone who is not present than a discussion with oneself.

I used to live in a huge apartment building for a while and remember that it could feel strange being awake at night when everyone else was obviously sleeping. All the lights were turned off, there were no noises. Coming home at night and seeing the building from afar, like a big ocean liner, with all the lights on, was also quite special.

Strangers starts in a building just like that. A huge apartment building on Tokyo’s noisy Route 8 where constant traffic keeps you awake and the density of the exhaust fumes forbids the opening of the windows. Most of the apartments are offices. Harada, a fortysomething TV script writer, has stranded here after his divorce. At first he can hardly sleep. The traffic noise is overpowering but after a few weeks he gets used to it. One night, despite the noise outside, he feels an intense loneliness. It seems as if he was the only person in this big building.  He finds out that there is only one other person, a woman, staying at the house at night. Everyone else leaves the place and lives somewhere else.

One night the woman, Kei, knocks on his door and wants to drink a bottle of champagne with Harada but he refuses. He regrets it and invites her a few days later. She is a beautiful woman but with a terrible burn mark where her breasts should be. While they start dating, Harada visits Asakusa, the downtown district in which he used to live with his parents. His parents died when he was very young. He never returned to the place but all of a sudden something attracts him magically. Many of the houses have been destroyed and replaced by modern ugly buildings. While walking around Harada meets a man who looks exactly like his dead father at the time of his death. He follows him to his house and there is his mother, she too is still young and looking exactly like she did before she died.

Harada knows that he shouldn’t return to see his parents but he cannot help himself. He has to go back again and again. His friends start to tell him that he is looking bad. Kei wants him to stop seeing them. He can’t and we understand why.

Something closely akin to the wonderful sense of security I’d felt at such times as a child had descended on me that night in Asakusa. I coul recall no such moments in all the years since my parents had died.

Yamada managed to write a ghost story that is at the same time an eerie tale and a realistic portrayal of loneliness, grief and the search for a meaning in life. Harada is at a turning point in his life. He has a hard time finding jobs, his wife got most of his money after the divorce, his son doesn’t want to see him, most women are not interested in a man like him. Falling in love with Kei seems not so much a choice as inevitable. They are both scarred in different ways. Meeting his dead parents is what infuses his days with meaning and warmth until he starts to pay a prize for it.

What did it amount to, anyway, this life I led? Busying myself with random tasks that popped up one after another, enjoying the moments of excitement each little sir brought before it receded into the distance, yet accumulating no lasting store of wisdom from any of it.

Strangers is an excellent ghost story and a melancholic depiction of the loneliness that living in a big city like Tokyo can bring. I really loved this book. I could hardly put it down and at the same time I didn’t want it to end.