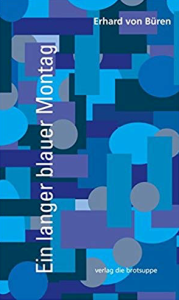 Published in 2013, A Long Blue Monday, is Erhard von Büren’s third novel. His earlier novels Wasp Days and Epitaph for a Working Man were published in 1989 and 2000 respectively. He lives in Solothurn, Switzerland.

A Long Blue Monday tells the story of Paul Ganter, a retired school teacher who has temporarily left his wife and taken an apartment in the city to write a book about Sherwood Anderson. Very possibly he could have done that at home, but we soon learn that this time out is about much more than just writing a book. He uses the time alone to delve into his feelings and memories and relives vividly an unhappy love story that happened over forty years ago, in the summer of 1959. That year he fell in love with Claudia, a girl from a very rich family and, in a desperate attempt to impress her, takes weeks off from school to write a trilogy of plays in the vein of the great American playwrights of the time. Every day he slaves over his work that seems to be a series of soliloquies put on paper. Once it is finished, he gives the play to his crush, hoping it will impress her. Sadly, just like all his other attempts at wooing her, this barely gets a reaction. Clearly, she’s not into him. Looking back, Ganter can’t help but admire the stamina of his younger self. And he realizes that while the result of his writing wasn’t successful, locking himself away, writing daily, going for long walks and experience the changes in the weather and nature surrounding him, was one of the most intense experiences of his life.

The story is told going back and forth in time. In the present, Paul spends a lot of time writing and reminiscing, but he also has long conversations with his daughter who discovers sides of her father she never knew existed. While the love story is central, it isn’t the most important aspect of Paul’s delving into his past. He also remembers vividly what it was like to come from a poor family, in which the men were battling alcoholism. He remembers how difficult it was to know what he wanted to do with his life and to achieve it. Trying to overcome the shortcomings of his upbringing, he became a master student. Unfortunately, for the longest time, he thought that he could master life and love just like he mastered school. This set him up to failure. Being shy didn’t help him either. Love and life choices are explored, but there’s one other important thing—the narrator’s intense love of American culture that finally leads him to become an English teacher and is now one of the reasons for his time out.

I hope my review will have told you several things—this is a very complex, rich book, but it’s neither straightforward, nor plot-driven. Funnily, for a novel that talks so much about American culture, it’s very unlike most American literature I know. It’s introspective and very quiet. Far more analysis of thoughts and feelings, than scenes and action. One could say, more telling than showing. The story meanders, goes back and forth in time, returns to certain events, adds additional information. Just like it happens to all of us in real life. We rarely remember events in a straightforward way.

I liked A Long Blue Monday very much. It’s a quiet book about a quiet, shy man, who feels strongly, struggles and fails, struggles some more, and then succeeds and finds meaning in all sorts of things. My favourite parts were the nature descriptions and if I had read this in English, you’d find dozens of quotes. The descriptions are lyrical and beautifully crafted. They are the most eloquent sign of the narrator’s rich interior life.

While reading A Long Blue Monday, I couldn’t help but think of another Swiss author, who writes similar descriptions— Robert Walser. If you know me, you know this is high praise.

I hope some of you have read this as well. I’m looking forward to the discussion.