I own everything Annie Ernaux has written up to The Years but have only read a few of her books. Since her books are so short, she seemed an excellent choice for my May project.

Annie Ernaux is divisive. Some people adore what she does, others are put off. Those who love her, praise her honesty, those who don’t, find her indecent. I go back and forth between these two reactions. Sometimes I find it a bit too much, as well. At other times, I’m just so fascinated.

What helped me get along with her better, was to see her oeuvre as a whole. Sure, you can read single books, but you will get so much more out of reading her, when you read more or all of her. It’s never just about the story or the topics of a book with her, it’s always about the process of writing and giving meaning. Writing about a woman’s life, her body, and often, her sexuality.

Several books have been rewritten Simple Passion, her account of her love affair with a Russian diplomat, is one of those. She wrote another book about her affair many years later – Se perdre (To lose oneself – not translated, I think). Aa a reader, you often wonder – Why does she write about this? Why does she have to reveal herself like this and so does she. You’re always part of the writing process as well, part of the thought processes behind the writing. 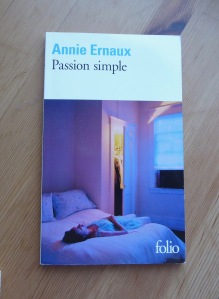 In Simple Passion (Passion Simple), Annie Ernaux analyses a love affair she had with a married man, the previous year. The affair lasted over a year and was all-consuming. She couldn’t think of anything else but him. Couldn’t find interest in anything else or anyone else, unless they somehow reminded her of him or had something in common with him. She sat whole days next to the telephone, waiting for his call. Spent whole afternoons preparing for his arrival; shopping new clothes, painting her nails, applying new make-up.

The absence of a call is agony. A call is bliss. She’s completely dependent on this man and doesn’t exist outside of their meetings. It’s never as apparent as when she goes on a holiday to Florence. She doesn’t even want to look at anything. Just wants to think of him, imagine how he would see the place.

The book describes everything. Her weakness, her dependence, her desire, her obsession. It’s like reading the account of a drug addict. She’s aware of that herself but there isn’t anything she can do. She wonders sometimes, if he feels the same, but she has no idea. Conversation isn’t exactly part of the whole affair. Sex is important, everything else, not so much. But that is also because of the language barrier. It’s not said in this book that he’s Russian, but in a later book it is revealed. She doesn’t speak Russian, and his French, while good, is not always accurate. He has difficulties to translate deeper meaning.

Since he’s a diplomat, it’s always clear, the affair will end. When it does, she’s shattered. And she takes note of the world around her again. And writes about her affair. It takes her five months during which the Berlin wall falls and the Ceaușescus are executed.

After having finished to write about her affair, she suddenly feels shame. A shame she never felt during the affair, a shame that comes from the idea to publish.

I found the way she described this affair interesting. Most of it rang so true. Haven’t we all waited next to a phone before? Spent afternoons getting ready or endlessly talking and thinking about our love interest? I never found it problematic, that she’s honest. I found it problematic that she never questions having an affair with a married man. Not once. It’s all about her and her feelings. He’s only interesting as far as he’s the object of her desire. And the other woman? It’s as if she doesn’t exist. Obviously, this shows how honest she is, as it doesn’t really make her look good.

People were shocked when this came out in the 90s. Also, because it was a departure from her earlier work and because it’s so explicit about female desire and sexuality. It was certainly courageous to write and publish this at the time. Nowadays, I find it a bit sordid. Not because of the descriptions – it’s never very explicit anyway – but, as I mentioned, because there’s another woman. If it’s a feminist act to live our passions, isn’t it also a feminist act to think of the other woman? I’m not judging that it happened, that would be naive, these things do happen, but that she’s never thinking or writing about it.

After the translation of The Years, Annie Ernaux received a lot of attention outside of France. She’s interesting, well worth exploring, but I’d say, this isn’t the best entry point to her work.

If you’d like to read another review – here’s on I wrote on A Woman’s Life. I liked that one a great deal.