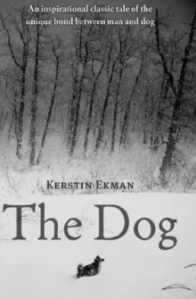 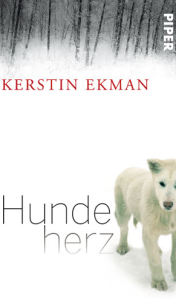 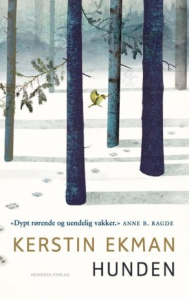 Swedish writer Kerstin Ekman is something like the grande dame of Swedish literature. She’s considered one of the most important, if not the most important living Swedish writer. She has written numerous novels, many of which received prizes and were made into movies. She’s also been extensively translated. Ekman began her career as a crime author but subsequently moved away from the genre. The novella The Dog – Hunden was published in 1986. I read the German translation, Hundeherz (by far the most poetic title) as I always feel it’s closer to the Scandinavian languages than English.

Before I start the review, I have to spoil the book. The blurb does so too and with good reason. The beginning of the book is quite sad, and, for most animal lovers, it would be too heart-breaking to read on not knowing whether there would be a happy ending. Luckily, there is. So, now you know it – Sad beginning, happy ending.

The Dog is set in the countryside of Northern Sweden. It’s winter and a man drives to a lake to go fishing. He has no intention to take his dog, but she sees him and runs after his scooter. Her little puppy follows her. In the snow and the cold, the puppy gets lost. Upon his return home, the man notices the dog’s absence and searches for him. To no avail. What follows is a dramatic tale of survival during a harsh winter, in a wild landscape. The puppy almost freezes and starves. At first, he just crouches under the low branches of fir trees, shivering, his heart beating wildly. Then he finds a dead elk and the meat of the massive animal helps him over many weeks.

During the long winter months, he learns to recognize the noises and traits of the landscape. Eventually, he explores farther and farther away from his hiding place. He learns to hunt and to avoid being hunted.

The story is told from the point of view of the dog, but Ekman doesn’t try to humanize the dog. She tells the story in a way that makes it very plausible, just describing what the puppy can see, smell, taste, hear. The result is brilliant. In lesser hands this might have become mawkish, but it isn’t. She is an astounding writer, with a huge vocabulary and intimate knowledge of the Swedish landscape, the flora, the fauna. The animals and plants are all named. It’s never just “a tree” or “a bird” or “a plant”. She’ll let you know exactly what it is. All the many wild birds and animals are differentiated through the noises their wings or paws make. The wind sounds different, depending on which grasses and plants it rustles. And the many scents are described in so much detail too. It’s true that every plant smells different when it is crushed.

The story isn’t sentimental and therefore, at times, a bit hard to read. After all, it’s a tale of survival and that includes hunting. The dog must hunt to survive. And there’s also an elk hunt later in the novella that leads him back to the man who lost him.

This is a tale about survival, about enduring cold, hunger, and loneliness. But ultimately it’s also a tale about the strong bond between man and dog.

I did expect this to be good, but I didn’t expect the writing to be this extraordinary. I’m already looking forward to reading more of her work.