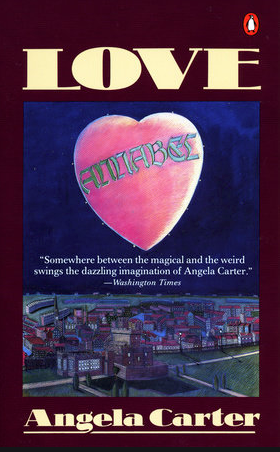 Opening an Angela Carter novel is like entering an opulent, sumptuously decorated room. It’s lush, it’s whimsical, it’s anything but minimalist. Love is no exception; it might even be one of the lusher ones I’ve read. Heroes & Villains has always been my favourite because of the imagery. Love has similar elements. The landscape, the apartment, the people, they are a bit wild, a bit mad, and reflect Angela Carter’s very distinct aesthetic. The book also reminded me of one of Le Douanier Rousseau’s paintings. He used to be my favourite painter as a child.

Love tells the story of a relationship triangle. One could call it a love triangle but whether there really is love among these three people, even though the title might indicate so, is questionable.

Annabel is a fragile, anxious art student who lives in her mind. Everything she sees is fed into her own mythology. Things have value only as far as they somehow fit into this mythology.

She quickly interpreted him into her mythology but if, at first, he was a herbivorous lion, later he became a unicorn devouring raw meat.

Lee, a former literature student and now teacher, is very different. He drifts through life, attracting women with his good looks and dazzling smile. His brother Buzz is more like Annabel. Slightly crazy, definitely wild, delinquent, and unpredictable.

At the beginning of this short novel, Lee and Buzz live together. They are only half-brothers and don’t have a lot in common except for a troubled childhood, but they are close or rather dependent on each other. One morning, after a party, Lee wakes up and a girl he doesn’t know lies next to him. How Annabel landed there, is explained later. This scene shows, they didn’t really choose each other. Fate brought them together. Annabel moves in with Lee. Buzz is travelling at that time, but once he comes back, dynamics change and the relationship becomes problematic.

Before Annabel moves in, Lee lives in white rooms. Her arrival brings colour and disorder. Because she’s an art student, and loves colour, she will soon cover his walls with paintings (see quote at the end of the post).

They rolled all over the pastel crayons scattered on the sheets so her back was variegated with patches and blotches all the colours of the rainbow and Lee was also marked everywhere with brilliant dusts, both here and there also darkly spotted with blood, each a canvas involuntarily patterned by those workings of random chance so much prized by the surrealists.

This is a rich tale of complicated relationships with destructive and self-destructive facets. Upon reading the names Annabel and Lee, anyone who knows Edgar Allan Poe, will immediately think of his poem Annabel Lee. That’s not a coincidence. If you know it, you know this is a tragic story. (You can read the poem here)

Annabel is so frail that a man like Lee, who carelessly drifts through life, seducing one woman after the other, unhinges her. And the friendship with someone like Buzz, who is as unconventional as they come, makes things even worse.

I loved this book so much. It’s one of a few books by her that I hadn’t read when I went through my Angela Carter phase. I’m not sure why. Possibly because of the title. I didn’t expect it to be this good. Reading it was like watching a very trippy movie or exploring a house with rooms that are all decorated in another, but very luxurious way. It’s also fascinating as a character study.

Love has so many symbols, themes, and images that fans of Angela Carter wil recognise from her other novels: rich interiors, leafy nature, passion, mental health, suicide, female sexuality, bourgeoisie, bohème, marriage, free love . . . I could go on and on.

I’m afraid, I’m not doing this complex book any justice. It would deserve an in-depth review but, because of my project, I don’t have the time to go deeper.

Angela Carter wrote an Afterword to Love, in which she imagines the future of her characters. It’s a feminist sequel to Love. Style-wise it was different from the novel, more sarcastic and cheeky.

I’ll leave you with a favourite passage from the beginning of the book (p.7)

In their room, Lee lay face down on the carpet in front of the fire, perhaps asleep. The walls around him were painted a very dark green and from this background emerged all the dreary paraphernalia of romanticism, landscapes of forests, jungles and ruins inhabited by gorillas, trees with breasts, winged men with pig faces and women whose heads were skulls. An enormous bedstead of dull since rarely polished brass, spread with figured Indian cotton, occupied the center of the room which was large and high but so full of bulky furniture in dark woods (chairs, sofas, bookcases, sideboards, a round mahogany table covered with a fringed, red plush cloth, a screen cover with time browned snaps) that one had to move around the room very carefully for fear of tripping over things. Heavy velvet curtains hung at the windows and puffed blue dust at the touch; a light powder of dust covered everything. On the mantelpiece stood the skull of a horse amongst a clutter of small objects such as clockwork toys, stones of many shapes and various bottles and jars.