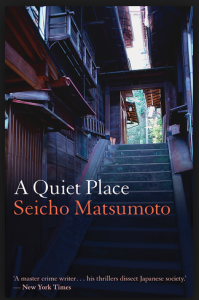 Seicho Matsumoto’s A Quiet Place is the second Japanese crime novel I’ve read this month. While it is very different from Keigo Higashino’s Devotion of Suspect X, they have one thing in common – they are both unusual and full of twists.

However, the similarities stop there. Higashino depicts a modern Japan, while Matsumoto shows us a very traditional Japan. Of course, Matsumoto’s book is much older. It was originally published in 1975. The world it depicts, the world of government officials, still exists, but the society as a whole has undergone changes. It’s a ritualised, rigid, and restrictive world with strict hierarchies and rules. There isn’t a lot of freedom and losing face is something that can happen all too quickly and always has devastating consequences.

This world is the backdrop of Matsumoto’s novel. Tsuneo Asai, a government bureaucrat, is informed of his wife’s death while he’s on a business trip to Kobe. The way he handles this situation, more afraid to inconvenience his superior than to rush home and find out what happened, is typical of his mindset. Unlike most others at the department of agriculture, he doesn’t come from a good family or a prestigious university. He’s not automatically promoted but he has to work hard for every step he wants to climb. His fear, not to get promoted or to displease his superiors is so great that it overshadows every single decision.

Back home in Tokyo, Asai learns his wife died of a heart attack in front of a boutique. He knew she had a weak heart but it is still a shock. She was so careful to avoid exertion. Even though he was fond of her, to find himself widowed again, is more an inconvenience than true heartbreak. What puzzles him the most is the question what she was doing in that neighbourhood. She wasn’t someone who went out much. He knew she attended haiku classes, but other than that, she mostly stayed at home. It isn’t entirely clear why he suddenly gets so obsessed with his wife’s doings but he does. Soon he finds out that he didn’t really know her. He was sure that her haiku writing was mediocre and now he learns she had great talent. When he discovers a hotel near the boutique in front of which she died, he begins to suspect she might have visited that hotel with a lover. He’s wrong but that doesn’t stop his suspicions.

As soon as he begins to suspect his wife, he starts an investigation and even hires a private detective. Asai is as obsessed as he is tenacious. At the same time, he knows that people at work shouldn’t find out what he suspects and what he is doing. The longer he investigates, the more he entangles himself.

I followed this character with great fascination and astonishment, but for the longest time I didn’t understand why this was called a crime novel. It’s clear from the beginning that Asai’s wife wasn’t killed. So why was this labelled crime? I can assure you, it’s labelled correctly but I won’t tell you why.

Apparently Matsumoto was called the Japanese Simenon. While I enjoyed this book a lot – especially for its depiction of Japanese society and certain neighbourhoods in Tokyo – I don’t see a resemblance. Matsumoto was very prolific, so possibly other novels led to that comparison. Luckily, quite a few of them are available in translation.

I came across Matsumoto’s book on Guy’s blog here.