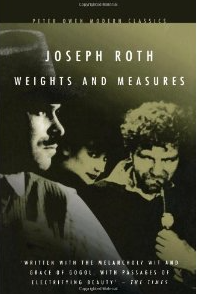 How does an upright, steadfast man survive among corruption, hypocrisy, and crime? Roth’s answer to this question, which lies at the heart of Weights and Measures – Das falsche Gewicht, is pretty simple: he doesn’t. Either he is tainted or he will go down.

Anselm Eibenschütz, a former officer, leaves his soldier’s life behind and becomes the inspector of weights and measures in Zlotogrod. He hasn’t changed profession by choice but because his wife urged him too. The change is hard on Eibenschütz. He’s not used to this region; it’s colder and rougher than where he used to live, and he isn’t cut out for the job. It’s not to his liking and since he is incorruptible and upright, he clashes with the merchants of the region. Hardly anyone conducts honest business. They all rely on extra-money, coming from the use of false weights and measures and smuggling. While the old inspector was open to bribes, Eibenschütz is not. He reports every single misconduct and sends even the poorest to prison. A kind man at heart, this is especially hard on him. He doesn’t want to punish those who have nothing, but can’t make exceptions because the richer would find out and he would be denounced. He finds ways to help the poor though. Either he doesn’t check on their shops or he warns them somehow.

Eibenschütz blames his wife for his misfortunes. Why did she have to talk him into leaving his former life? He begins to hate and neglect her and when he finds out she’s cheating on him, it offers him an excuse to neglect her even more.

In the province of Zlotogrod is a border tavern that is visited by smugglers. Jadlowker, the owner, is a profiteer and famous everywhere for his criminal activities. He lives with a beautiful gypsy woman, Euphemia. When poor Eibenschütz sees her for the first time he falls in love and becomes a regular customer.

From that moment on it goes downhill for Eibenschütz. Even though he is able to arrest Jadlowker and is named supervisor of the tavern, he doesn’t find happiness, but turns into an alcoholic. Eibenschütz isn’t the only one who is tested. There’s an unseasonably warm winter towards the end of the book; a cholera epidemic breaks out and kills hundreds. Because people fear to touch the dead, prisoners are used as undertakers. Jadlowker grabs the opportunity and flees. The end of the book is foreseeable and tragic.

I thought this was an absolutely remarkable novel for many reasons. The main theme is the clash between an honest man and a corrupt system, but what is amazing is how the story unfolds in front of the background of the disintegrating Austro-Hungarian monarchy and serves as a mirror. The book really gives you a feel for how huge this monarchy was, how extended, and how many cultures were part of it.

What I liked most is how Roth used the descriptions of the place and the weather to show Eibenschütz’s emotions and to underline the wild remoteness of this region. There were many beautiful small scenes and episodes. Eibenschütz is upright and stiff, but he’s also very emotional and feels deeply. His life as a soldier sheltered him emotionally; experiencing heartache and passion, unhinges him. When he falls in love he discovers nature. Before his “awakening” nature is just a phenomenon he sees but barely notices. The changing seasons bring rain or snow, breaking ice or sunshine, but that doesn’t affect him. Once he’s “awake” he feels the seasons, feels he’s part of it.

Weights and Measures is a wonderful book. Short, complex, and filled with poetic descriptions. Knowing that Roth battled alcoholism all of his life, gives Eibenschütz’ descent into alcoholism an even deeper meaning.