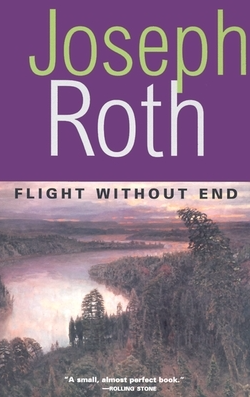 I’ve read a few novels by Joseph Roth now and every time I’m surprised how different they are. Die Flucht ohne Ende – Flight Without End is no exception. This is a Roth I’ve not encountered so far, or only in snippets. Flight Without End clearly shows the mark of the journalist, but it’s also the book of someone who cannot take the society he lives in seriously. Rarely have I seen him this sarcastic, mocking individuals and groups of people. And rarely have I come across a Roth that was this funny. I had to laugh out loud more than once and truly wish the translator was able to capture this. Roth’s wit and humour is very subtle and although a translation could be literal, the humour might get lost in translation as it’s often tied to one word that changes the meaning. Mostly he uses it when describing someone. Here’s just a short example.

A young actress, who indeed slept with the fat second mayor but came out of this embrace undamaged, partially even refreshed.

I take just one element of the sentence to explain what I mean. It’s entirely possible to choose the word unharmed instead of undamaged but it would remove a lot of the fun. “Unbeschädigt” means both unharmed or undamaged, but normally you’d use it for an object, while unharmed would rather mean a person. Roth chose undamaged very consciously.

What struck me too in this book was how cosmopolitan Roth was. The book starts in the Russian steppe, moves to Baku, from there to Vienna, then to a unamed city on the Rhine, and ends in Paris. Each place is described masterfully, its essence captured, its character laid bare.

The story is a bit more problematic. I’ve seen this book mentioned as one of Roth’s weakest works, which would have needed some editing. I agree to some extent. I didn’t mind the lack of plot. What we find here is basically the story of a quest. Franz Tunda, former officer, then captive of the Russian army, escapee, revolutionary, drifter and private tutor, lacks one thing – a home. What is home for a man like Tunda? If he can be of some use, he’s adopted everywhere, but never really welcome. He stays an outsider and this makes him a keen observer. He sees behind everyone’s masks, doesn’t buy any of the big theories on progress and wealth. He’s as wary of the communists as he is of the socialist’s and the bourgeoisie. They all have a hidden agenda. That’s why his flight is without end because, as vast as the world may be, society ultimately makes it very small and there’s no home for those who don’t play along. When I get so much insight and analysis of people and countries I don’t mind a lack of plot. My reservation has something to do with the structure of the book. It’s presented as if we were reading an account of someone who is Tunda’s friend. At the same time there are accounts that are directly made by Tunda and it switches occasionally from third to first person. I think this would have needed editing but it’s a minor flaw.

One of the most poignant scenes is when Tunda visits the grave of the unknown soldier, under the Arc de Triomphe, in Paris.

The blue flame burned not to honor the dead soldiers, but to reassure the survivors. Nothing was more cruel than the blissfully ignorant devotion of a surviving father at the grave of his son, whom he had sacrificed without knowing it. Tunda sometimes felt as if he himself lay there in the ground, as if we all lay there, all those of use who set out from home and were killed and buried, or who came back but never came home. For it doesn’t really matter whether we’re buried or alive and well. We’re strangers in this world, we come from the realm of shadows.

Flight Without End doesn’t show us a poetic or lyrical Roth. It’s not elegiac or nostalgic. It’s sarcastic and ironic. It’s the work of someone who saw the downside of globalisation long before anyone else and who was no fool when it came to human beings. There are a few good ones out there but they hardly ever occupy the big stages; they might be hidden somewhere in the Taiga, doing their thing quietly and unseen.

I thoroughly enjoyed this book. It’s witty, irreverent, unflinching and astute. It may not be the best book for someone who hasn’t read Roth yet, but it’s a must-read for those who already like him.