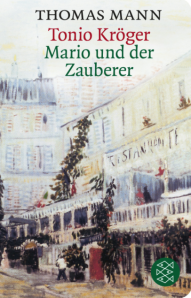 Tonio Kröger is considered one of Thomas Mann’s masterpieces, but only a few elements spoke to me, most of it infuriated me.  The writing is stellar, as usual, and the way he described Lübeck – the narrow alleys and gabled roofs – made me want to travel there, but the idea of the artist as tortured soul and ultimately superior was hard to stomach.

Tonio Kröger is the son of a German Consul and a Southern woman. He’s got his looks, – dark eyes and dark hair – and the name from her. From an early age on, Tonio feels he’s different, an outsider. Not only because his mother’s from the South, but because he loves books and art and feels like an artist. He first feels an intense love for blond and blue-eyed Hans and later for the blond, blue-eyed Inge. They seem to live in another sphere, a happier one, more immersed in life and what society expects from them.

Tonio wants to become a writer and finally, in his twenties, leaves Lübeck for Munich where he lives a life of debauchery, which disgusts him eventually. A long central chapter shows us Tonio discussing his views of art and life with the painter Lisaweta Iwanowna. Tonio is in his thirties now. Prematurely aged and sobered. Shortly afterwards, he departs for his hometown Lübeck. He visits his family home, which has been sold after the death of his father. One part of the stately home houses a public library. Tonio walks through the once familiar rooms. There’s nothing here for him anymore. He leaves for Denmark. At the hotel in Denmark he meets Hans and Inge again. They are married. He watches them without making himself seen. He’s less an outsider now than a spectator, still, he feels keenly that he’s different and decides to return home which isn’t Lübeck anymore.

A last letter to Lisaweta tells us he’s made peace with himself and will return to Munich for good.

The descriptions and the structure of the novella are wonderful. The way Mann captures the feeling of being an outsider is something one can easily relate to. But I didn’t like the ideas contained in the book. Tonio suffers a lot and he would like to be an ordinary person, like Hans and Inge. He would like to be blond and blue-eyed because those people have an easier, happier life. He’s tortured because he’s no conformist, but an artist. This is so dated and clichéd, it’s painful. Plus the association of blue eyes, blond hair with health and strength made me shudder. There’s also a lot of arrogance in this depiction of an artist. Yes, Tonio does suffer – or says so – , but he very obviously feels superior too.

I don’t think you have to be a tortured soul to be a great artists. Feeling like an outsider and being a non-conformist, most probably comes with it, but it doesn’t mean you have to suffer. And it most certainly doesn’t mean you are superior. I can’t accept the idea of an artist (or anyone else) as a superior person  or as “chosen”. That’s pure hubris. Tonio Kröger is filled to the brim with hubris. The suffering Tonio professes felt more like a pose than real pain.

Has anyone read Tonio Kröger? How do you feel about it?