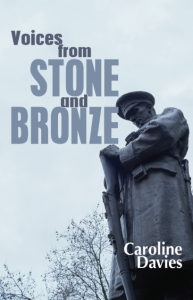 For the last readalong before the summer break we are reading something we haven’t read before—poems. I know people are sometimes reclutanct to read poetry, so to encourage you to participate, I’m keeping the “rules” very free. I’ve chosen four different collections and those who want to join can either pick only one or all of them, read only a few, or even only one poem. I don’t think I will review all four of the books in their entirety, but will choose several poems from the four collections

The Poems of the Great War collection is probably the one book most readers are familiar with. Memorandum is a collection by Vanessa Gebbie whose short story collection Storm Warning we’ve read last year. Vanessa even joined our discussion which was a special treat fo those who participated. Poet Caroline Davies has been a long-time follower of the read along. I’ve always enjoyed her thoughtful comments and when she suggested, we read poems, I was immediately enthusiastic, especially since this finally gives me the opportunity to read her poetry collections.

Here are the first lines of each collection

In Flanders Fields (John McCrae)
In Flanders fields the poppies blow
Between the crosses, row on row,
That mark our Place; and in the sky
The larks, still bravely singing, fly
Scarce heard amid the guns below.
(….^)

The Litany
She has to look down as the roll call begins.
She knows all of them, each name, every family.
Thomas Arnold, G Arthur Caffrey, Thomas Cudworth, T Owen Davies
and then the moment of her son’s name when she raises her head. (…)

Sirens
When the sirens sound we huddle
under the kitchen table.
Mam, Nain and me.
It’s oak, it will keep us safe
when the house falls down.
Nain says Liverpool’s taking it bad. (…)

Poems of the Great War

Published to commemorate the eightieth anniversary of Armistice, this collection is intended to be an introduction to the great wealth of First World War Poetry. The sequence of poems is random – making it ideal for dipping into – and drawn from a number of sources, mixing both well-known and less familiar poetry.

Voices from Stone and Bronze by Caroline Davies

A moving, honest and never sentimental collection that gives a voice to London’s many war memorials.
In her second poetry collection Caroline Davies turns her attention to the War Memorials of London. Voices from Stone and Bronze brings to life those who fought and died and those who survived, including some of the sculptors who had themselves come through trench warfare to a changed world.
Meticulously researched and deeply humane, these narrative poems apply a lyrical sensibility without sentimentalism; a deeply affective collection.

Caroline Davies debut collection was inspired by the experiences of her grandfather, James Jim Honeybill, a merchant seaman in the Malta convoys of the Second World War.

The poems dramatically document the Navy s attempts to resupply the Mediterranean island, suffering severe losses at the hands of the German blockade. Beginning with the image of her mother as a child who has come to see her naval father as a stranger, the poems continue on to the voices of the men aboard the M.V. Ajax, fighting to get through against all odds, and making the greatest sacrifice of all. Skilfully incorporating a wealth of found material, recordings and interviews, this narrative poetry sequence captures a slice of history with visceral clarity.

Memorandum is a haunting collection of poems that summons voices from the shadows of the First World War. Vanessa Gebbie transforms prosaic records of ordinary soldiers, and the physical landscape of battles, war graves and memorials, into poignant reflections on the small and greater losses to families and the world. Vanessa Gebbie is a writer of prose and poetry. Author of seven books, including a novel, short fictions and poetry, her work has been supported by an Arts Council England Grant for the Arts, a Hawthornden Fellowship and residencies at both Gladstone’s Library and Anam Cara Writers’ and Artists’ Retreat. She teaches widely. http://www.vanessagebbie.com “From the idea of a shell reverting to its unmade, peaceful state to dead men buried in Brighton and France being mourned by their mother in Glasgow … heartrending images such as the Tower of London’s ceramic poppies seen as callow recruits, doubts about a corpse’s identity and how dregs at the bottom of a cup can be reminiscent of the deadly Flanders mud. This is a modern view, wise and compassionate, of Europe’s fatal wound.” Max Egremont, author of Siegfried Sassoon and Some Desperate Glory, The First World War the Poets Knew “Vanessa Gebbie is that rare breed of poet who understands the trials and tribulations of the ordinary Tommy.” Jeremy Banning, military historian and researcher, battlefield guide “The dead who linger around memorials and battlefields slowly step again into the light. History may remember them collectively, but Gebbie’s achievement is to present, with sensitivity and without sentimentality, lives rooted in the particular rhythms of hometowns, families, and memories.” John McCullough, author of Spacecraft and The Frost Fairs “These poems rise like ghosts from a scarred landscape.” Caroline Davies, author of Convoy

Should you feel like joining but don’t want to read a whole collection of poems, don’t hesitate to read and post on only one or just a couple of the poems.

Further information on the Literature and War Readalong 2017, including all the book blurbs, can be found here.