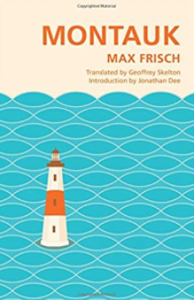 When I decided to do Max Frisch and Ingeborg Bachmann weeks, I wasn’t entirely aware how ideal it was to pick Montauk. Although Frisch and Bachmann were a couple for a few years that doesn’t necessarily mean that their work will reflect that, but in their case it does. I’ve read Montauk alongside a biography of their relationship and the poems of Ingeborg Bachmann and it was uncanny to find them both so present in their respective work.

When Montauk came out in 1975, it caused quite a stir. Frisch was by that time famous for his novels and his plays and Montauk, even though it’s called a novella, was a departure from those genres. As Frisch states in the book, he wanted to write a story about his life, not inventing or adding anything, just stating the facts.

Montauk has a frame story. Frisch stayed in the US, in 1974, for a book signing tour. The last two days of his stay, just before his 63rd birthday, he spends with 30-year-old Lynn, a publisher employee. They decide to take a trip to Long Island and visit Montauk. The novella tells the story of this trip and the brief love affair he has with Lynn. This story frames memories of his life, his youth, the relationships and friendships he had. For many readers at the time, Frisch was too outspoken. He wrote about the women in his life, jealousy, affairs, impotence, money, fear of death and a lot more.

Two of the most interesting and longest parts are about his friendship with a man who isn’t named and his love story with Ingeborg Bachmann. The relationship with this man left a wound as he was his patron but never encouraged him to write. He always encouraged him to become and stay an architect, as he clearly didn’t think much of Frisch as a writer.

Frisch did initially want to become a writer and had a brief career as a journalist but then became an architect and, for the longest time, didn’t write full time.

The chapters about his love story with Ingeborg Bachmann are some of the most intense. I won’t say too much about it now, as I’ll be writing more about their story next week.

Initially, I wasn’t too sure about the book but then found it more and more engaging. It makes sense to call Montauk a novella, even though Frisch says that he hasn’t invented anything, that everything happened exactly as he describes it. This may be true but there is still an artistic choice. A choice which is reflected in the things he decides to tell and those he doesn’t mention but also a choice of structure and narrative voice. As I said before, there’s a frame story that is interwoven with passages describing scenes of his life. Another style element is the switch from first to third person, as if Frisch was writing from his own point of view and then switching to an outside perspective, writing about himself as his observer. It’s a very interesting technique.

The book can be read in three different ways. First, as a story that is engaging and interesting, without taking into consideration that it’s autobiographical. But you can read it as an autobiographical text too, and it will tell you a lot about the man Max Frisch. Not so much about the writer, as writing isn’t mentioned that often. He seems to have a very matter-of fact view of himself as a writer. He even says that he has no imagination. Writing is a craft he’s good at and that has brought him fame and fortune. Not more, not less. At the same time, since this is also a metafictional book, we can find implicit views on his literary production. This leads me to the third way of reading this book – as metafiction. Montauk says a lot about the production of autofiction or the choices an author has when writing about his life. He could have just told the story of his life chronologically, or, like Annie Ernaux, picked moments, zooming in on them, magnifying them. In many ways, he does the opposite. Yes, there’s the story of the Montauk weekend, which takes up more space, but the rest of his life is condensed.

At the time, when Frisch wrote this, Ingeborg Bachmann was already dead. I couldn’t help but wonder whether this death, which must have shaken him, even though they were no longer together, might not have triggered this work. When someone dies who is or was very important to us, it invariably makes us look back, reminisce, think about our life and contemplate our own mortality. In Montauk, Frisch does all this, using spare, minimalistic prose, and a gentle, melancholic tone. Montauk is this rare thing – a pleasure to read and a book that makes you think long after finishing it.