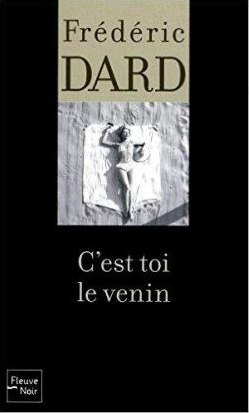 I have no idea why I haven’t read any Frédéric Dard novels so far. Possibly, because in France his standalone novels are a bit overshadowed by his San-Antonio series, which never tempted me. Or because he was so prolific that I had no clue where to start. He wrote at least 280 novels, twenty plays, and sixteen adaptations for the cinema. There was one novel, however, I always meant to read because it has been made into a movie (Toi, le venin – Night is Not For Sleep aka Blonde in a White Car), of which my dad was very fond. He even had a single of the film music. That’s why I chose this book over all the many others that sounded just as good and also over all those already translated into English.

Ces’t toi le venin, which I would translate as “You’re the poison” tells the story of Victor Menda. Victor Menda, a young man of twenty-eight years, is down on his luck. He has no job, no money, no relatives, no friends and serious dept at the casino. The story’s set on the Côte d’Azur and at the beginning we see Menda walk along the sea, contemplating suicide. He eventually decides against this drastic measure and takes a walk along the water. Suddenly a car stops. A woman’s at the steering wheel and demands that he join her. Menda does as he’s told. He’s intrigued and wants to see the woman’s face but a scarf hides it. She finally stops again and wants to have sex with him. Although he finds this openly demanding behaviour a tad intimidating and even revolting, he still accepts. When she finally boots him out again, there’s nothing else he can do but write down her number plate.

Don’t worry, I haven’t given away too much of the plot, as what I just summarized doesn’t take up more than a few pages. The story as such begins when Menda finds the owner of the car. The car belongs to Hélène, the older of two very beautiful and rich sisters who own a huge villa near Nice. The younger sister, Ève, sits in a wheelchair since the age of thirteen. The young girl develops a massive crush on Menda and so the older one begs him to stay with them. Unfortunately, Menda falls in love with the older one.

It soon becomes obvious that things are not as they should. There’s someone using the car at night but it doesn’t seem to be Hélène. Other strange things happen, which alert Menda.

The atmosphere and the mood in the novel get darker and darker. At first Menda thinks, he’s struck gold, but soon he can’t shake off the feeling of being trapped and used. Someone is playing cat and mouse with the people living at the villa. Is it one of them or someone from outside?

I absolutely loved this novel. Some of it is predictable but there are still enough surprising twists and the end is chilling.

Like Simenon, Dard relies heavily on dialogue. There are just a few descriptions here and there to create a mood and atmosphere. That’s why reading the book feels a lot like watching a movie. It has immediacy and a pretty brisk pace.

I’m a sucker for books set on the Côte d’Azur, but even if Dard had chosen another setting, I would have enjoyed this book a lot.

I hope to watch the movie soon, until then, I’ll listen to the score. It’s captures the mood of the novel perfectly.

While C’est toi le venin hasn’t been translated yet, some of Dard’s other novels have been published by Pushkin Press in their Vertigo series. 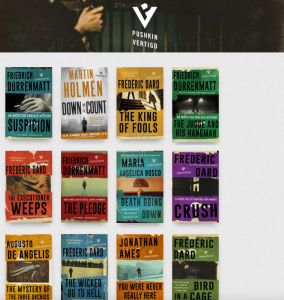