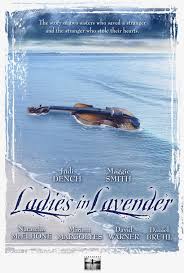 Ever since I have watched the charming Ladies in Lavender I had felt like reading the short story on which it was based. It took a while to find it as I did not know William J. Locke‘s books. I finally discovered that it was in his short story collection Far-Away Stories. Ladies in Lavender is the only one I have read but since I liked it and I bought the book, I will certainly read others sooner or later.

Two elderly sisters (they are 45 and 48 respectively in the book but in their 70s in the movie), both spinsters, live together in a beautiful house on the seaside in Cornwall. They inherited the house from their late father and since his death, some 27 years ago, they have been living in that house alone, sharing a bedroom like a married couple. Theirs is a quiet life, very similar to the life of the ladies in Cranford. A change of weather, something special for lunch, a visitor, are the only distractions they seem to have. They are content and live a certain routine, with the older of the two being in charge.

All this ends when they find a young man on the beach below their window. The sea has washed him ashore. He is unconscious and his ankle is broken. The two ladies cannot help seeing how delicate and beautiful he looks and decide to have him carried to their house and look after him.

What follows is at times quite comedic in the movie. The young man doesn’t speak English, only a little German, but the ladies hardly speak any German at all. It takes a while and some coincidences until they find out that he is a talented Polish violinist.

It is touching how intensely these two old women fall in love with the young man. None of them has ever fallen in love before. They were not married, never had lovers. The adventure with the young man is the most beautiful thing that has ever happened to them, it feels like a fairy tale and they assume he will stay with them forever.

The story of two elderly women falling in love with a very young man could seem somewhat far-fetched but a few years back my mother told me a similar story. She lived in an area of the city that is very green and where a lot of people walk their dogs. My mother was part of a group of 50 and 60+ women going for walks together when suddenly, one day, an extremely good-looking young man appeared with his dog (I wasn’t introduced so can’t tell you how good-looking he was). In any case my mother was quite bewildered as she observed how one of the older women started to fall for the young man. But not only was she in love, she assumed that he had feelings as well as he was very kind and attentive. When he finally showed up after a few months with a young girlfriend, the woman had a major breakdown.

Judi Dench and Maggie Smith play the elderly sisters in the movie and they play them extremely well. They are touching and funny at the same time. The choice for the young man, German actor Daniel Brühl, was less fortunate. I just don’t think he is all that handsome, at least certainly not at handsome as the man described in the book.

In the novel, the story plays clearly before WWI while the movie takes place just before WWII, apart from this and changing the age of the main characters, the movie stays true to the short story but goes into much more detail in the second half.

As nice as the short story is, I preferred the movie. It’s a lovely movie with great actresses, a beautiful setting and a melancholic undertone that depicts very well a certain type of woman that life has passed by.

As I said in the beginning I did not know William J. Locke. It seems he was born in British Guinea in 1863. His novels were five times on the bestseller lists in the US and there are 24 movies based on his work. Amazing.