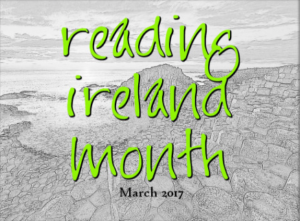 Last year, I missed Cathy’s Reading Ireland Month and so I was glad to see that she and Raging Fluff would host it again in March.

Since I try to read from my piles, I went through my book shelves in search of Irish writers. I found much more Irish books than I thought I would and now I’m spoilt for choice.

Here are a few of the books that I might read, in no particular order:

Elizabeth Bowen The House in Paris

When eleven-year-old Henrietta arrives at the Fishers’ residence in Paris, little does she know what fascinating secrets the house itself contains. Henrietta finds that her visit coincides with that of Leopold, an intense child who has come to Paris to be introduced to the mother he has never known. In the course of a single day, the mystery surrounding Leopold, his parents, Henrietta’s agitated hostess and the dying matriarch in bed upstairs, come to light slowly and tantalisingly.

Louise O’Neill Asking For It

A soul-shattering novel that will leave your emotions raw. This story will haunt me forever. Everyone should read it’ Guardian

In a small town where everyone knows everyone, Emma O’Donovan is different. She is the special one – beautiful, popular, powerful. And she works hard to keep it that way.

Durraghglass is a beautiful mansion in Southern Ireland, now crumbling in neglect. The time is the present – a present that churns with the bizarre passions of its owners’ past. The Swifts – three sisters of marked eccentricity, defiantly christened April, May and Baby June, and their only brother, one-eyed Jasper – have little in common, save vivid memories of darling Mummy, and a long lost youth peculiarly prone to acts of treachery.

Into their world comes Cousin Leda from Vienna, a visitor from the past, blind but beguiling – a thrilling guest. But within days, the lifestyle of the Swifts has been dramatically overturned – and desires, dormant for so long, flame fierce and bright as ever.

In a house overlooking Dublin Bay, Mimi and her daughter Grace are disturbed by the unexpected arrival of Grace’s daughter Polly, and her striking new boyfriend. The events of the next few days will lead both of them to reassess the shape of their lives. For while Grace’s visitors focus her attention on an uncertain future, Mimi, who receives a messenger of a very different kind, must begin to set herself to rights with the betrayals and disappointments of the past.

When Fintan Buckley develops an interest in old autochrome photographs, strange things start to happen. To all appearances, Fintan holds down a successful job and enjoys life with his conventional middle-class family in Dublin, yet inwardly he starts to experience states of altered consciousness, with unsettling hallucinations and sudden insights. Meanwhile, Fintan’s sister Marina has been unearthing family stories from the past and the two of them, in different ways, find themselves renegotiating their history and the decisions that have brought them to this place, this present.

The once-great city of Bohane on the west coast of Ireland is on its knees, infested by vice and split along tribal lines. There are still some posh parts of town, but it is in the slums and backstreets of Smoketown, the tower blocks of the Northside Rises and the eerie bogs of Big Nothin’ that the city really lives.

A timeless classic dealing with the complexity and hardships of relationships, addiction and faith.

Judith Hearne, a Catholic middle-aged spinster, moves into yet another bed-sit in Belfast. A socially isolated woman of modest means, she teaches piano to a handful of students to pass the day. Her only social activity is tea with the O’Neill family, who secretly dread her weekly visits.

Judith soon meets wealthy James Madden and fantasises about marrying this lively, debonair man. But Madden sees her in an entirely different light, as a potential investor in a business proposal. On realising that her feelings are not reciprocated, she turns to an old addiction – alcohol. Having confessed her problems to an indifferent priest, she soon loses her faith and binges further. She wonders what place there is for her in a world that so values family ties and faith, both of which she is without.

And one crime novel

Tana French In the Woods

When he was twelve years old, Adam Ryan went playing in the woods with his two best friends. He never saw them again. Their bodies were never found, and Adam himself was discovered with his back pressed against an oak tree and his shoes filled with blood. He had no memory of what had happened.

Twenty years on, Rob Ryan – the child who came back – is a detective in the Dublin police force. He’s changed his name. No one knows about his past. Then a little girl’s body is found at the site of the old tragedy and Rob is drawn back into the mystery. Knowing that he would be thrown off the case if his past were revealed, Rob takes a fateful decision to keep quiet but hope that he might also solve the twenty-year-old mystery of the woods.

Have you read any of these? Which ones would you recommend?

52 thoughts on “My Plans For Reading Ireland Month”