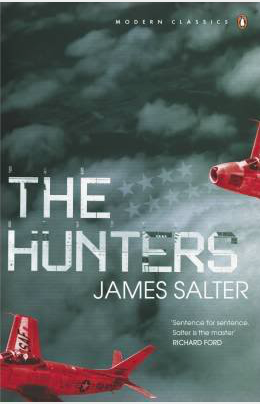 James Salter’s The Hunters is this month’s Literature and War Readalong title. It’s the first novel about the Korean war that we’re reading in the read along. I’ve been keen on reading James Salter for ages as he’s always mentioned as one of the greatest US writers. Published in 1956, The Hunters was Salter’s first novel. Until the publication of this novel, Salter was a career officer and pilot in the US Air Force. He served during the Korean war where he flew over 100 combat missions. This was certainly the reason why he chose to write about a fighter pilot in his first novel. The novel has been made into a movie starring Robert Mitchum and Robert Wagner. James Salter died last June in Sag Harbor, New York.

Here are the first sentences:

A winter night, black and frozen, was moving over Japan, over the choppy waters to the east, over the rugged floating islands, all the cities and towns, the small houses, the bitter streets.

Cleve stood at the window, looking out. Dusk had arrived, and he felt a numb lethargy. Full animation had not yet returned to him. It seemed that everybody had gone somewhere while he had been asleep. The room was empty.

He leaned forward slightly and allowed the pane to touch the tip of his nose. It was cold but benign. A circle of condensation formed quickly about the spot. He exhaled a few times through his mouth and made it larger. After a while he stepped back from the window. He hesitated, and then traced the letters C M C in the damp translucence.

And some details and the blurb for those who want to join:

Captain Cleve Connell arrives in Korea with a single goal: to become an ace, one of that elite fraternity of jet pilots who have downed five MIGs. But as his fellow airmen rack up kill after kill – sometimes under dubious circumstances – Cleve’s luck runs bad. Other pilots question his guts. Cleve comes to question himself. And then in one icy instant 40,000 feet above the Yalu River, his luck changes forever. Filled with courage and despair, eerie beauty and corrosive rivalry, James Salter’s luminous first novel is a landmark masterpiece in the literature of war.

Further information on the Literature and War Readalong 2016, including all the book blurbs, can be found here.

17 thoughts on “Literature and War Readalong May 31 2016: The Hunters by James Salter”