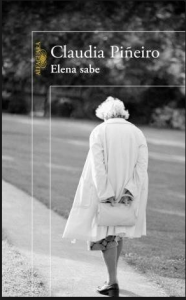 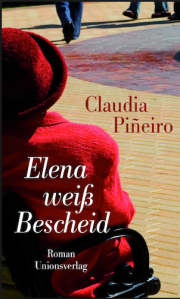 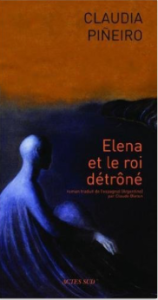 Claudia Piñeiro is an Argentinian crime writer. Most of her novels have received prizes. This one is no exception. It received an Argentinian and a German prize. The good news—most of Piñeiro’s novels have been translated. The bad news—for reasons I really don’t get, this is one hasn’t been translated into English, but you can read it either in Spanish Elena sabe, French – Elena et le roi détrôné or German Elena weiss Bescheid. I suppose there are other translations.

Ever since I read Piñeiro’s All Yours – Tuya  in 2012, I knew I wanted to read more of her novels. Not sure why it took me so long. Two weeks ago, I thought of her again and ordered this one and another one, Thursday Night Widows.

Elena knows tells the story of a woman, Elena, who suffers from Parkinson’s disease. Her daughter, Rita, has been found dead in a belfry. The police have ruled that it was a suicide but Elena cannot accept that. She is sure that Rita was murdered. The book follows two alternating timelines, both from Elena’s point of view. The first is set firmly in the present, while the second timeline tells Elena and Rita’s story in flashbacks up until the suicide/murder. Since the police have stopped the investigation, Elena has decided that she will investigate on her own. Since she suffers from advanced Parkinson’s disease, this is a difficult task. The timeline set in the present follows her on a journey from her apartment to someone else’s apartment. She hasn’t seen this person in twenty years but hopes that she will “lend” her her body and investigate on Elena’s behalf.

What a breathtaking story. So well done and with an amazing twist at the end. I can’t say I knew a lot about Parkinson’s before reading this novel. I do now. I had no idea how awful this is. Elena’s days are an ordeal. Every single thing needs careful planning. Even the most mundane, routine acts. She cannot lift her head anymore, due to atrophied muscles in the neck. She cannot move, walk, etc, unless she takes tablets that take a certain amount of time to kick in and whose effect dwindles all too quickly. The flash back sections tell us that she lives with Rita, a forty-year-old single woman and that their relationship is one of love and hate. They exchange sentences that feel like the cracking of whips. Needless to say, Rita is the one who takes care of Elena. From what Elena tells the reader, we can deduce that Rita’s disgusted by her mother’s illness.

In a novel that is told like a taut crime novel, Claudia Piñeiro explores topics like illness, getting older, the responsibilities of women to take care of the elderly and of kids. She shows us women trapped in situations from which there’s no escaping. The end came as a shock but made perfect sense.

This is an outstanding novel. Sharp, taut, and unsparing. Highly recommended.