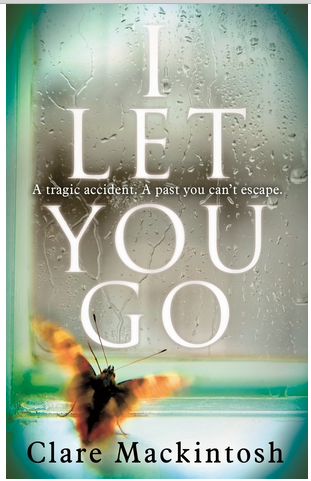 I came across Clare Mackintosh’s novel I Let You Go on Twitter. It’s another one of those psychological thrillers with a split narrative and a huge, stunning twist. But, for once, I really loved the twist and the split narrative actually added not only other POVs but another genre altogether. Unfortunately I can’t say much about the twist, only that I found it great but if I told you why, it would be utterly spoilt. But I can talk about the split narrative.

The prologue describes a horrible accident. A small child runs from his mother and is killed in a hit and run. The novel is told from several POVs – the two most important ones being Clare’s and the police’s. Adding the POV of the police was quite unusual and made this book a combination of psychological thriller and police procedural, which worked well.

Clare runs from Bristol after the accident and hides in Wales. She’s an artist but her hand has been so severely wounded that she cannot work as a potter anymore. She starts to take photographs of the beaches, where she lives. It’s out of season when she arrives and the cottage she rents is far away from any other houses. The only people she sees are the owner of a caravan park and the local vet who helps her when she finds an abandoned puppy. While Clare, who is haunted by memories of the accident and other traumatic events,  tries to heal and find new meaning in life, the police frantically look for the person who killed the little boy.

The book has a leisurely pace until the twist in the middle, but from then on it gets very fast paced and suspenseful. We find out that the accident isn’t the only horrible thing in Clare’s past and that the past she hopes she’s left behind, is catching up with her. I can’t say more.

This is a suspenseful, well-plotted, fast-paced psychological thriller with a major twist. The characters are well-drawn, the setting is atmospheric and the end doesn’t disappoint. Maybe the police parts are a tad too long, unless this is meant to be a first in a series. If it’s a standalone, then those parts could have done with some cutting because we don’t need to know that much about the private lives of the detectives. Possibly, though, it was Clare Mackintosh’s homage to her twelve years in the police force. All in all, a minor thing that doesn’t change that I enjoyed this book a lot.