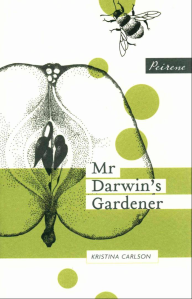 Mr Darwin’s Gardener is a novella by Finnish author Kristina Carlson. In her native Finland, she’s a popular children’s book author but has also written three highly acclaimed books for adults, one of which is Mr Darwin’s Gardener.

The blurb calls this novel “A postmodern Victorian novel about faith, knowledge and our inner needs.” The main character is Thomas Davis, Darwin’s gardener. A loner and widower whose faith and trust in life are tested. Not only has he lost his wife but his children are sickly. Since he shuns religion, he can’t even find solace in the church. When the book begins he’s not sure life is still worth living. This sounds conventional enough but the way this novella is presented is anything but. The “story” is told by multiple narrators. The effect is that of a chorus. Kristina Carlson dips in and out of various POVs, often switching from first to third within a paragraph. I could have gotten used to that if the 1st and the 3rd POV had been that of the same person, but very often, that wasn’t the case. The transitions were blurred most of the time and since there were so many characters it was confusing at times. It would have helped, if there had been a change in voice and tone, but Kristina Carlson used the same voice and tone throughout the novel. The way the narrators spoke about faith and destiny, was the only way to distinguish one person from another.

Nonetheless, I enjoyed large parts of the book, because of the descriptions. This book contains some of the most exquisite and precise nature descriptions I’ve come across. And they do serve a purpose. This is a novel about faith, and about a very specific point in time. Darwin’s books challenges the Bible, contradicting it, questioning it. What did a person have when the person lost his/her faith?— nature. Those detailed descriptions reminded me of some very detailed religious paintings. A believer would find much solace in their minutiae. And so, Thomas Davis finds solace in contemplating nature, following its change through the seasons. Its never-ending cycle is a consolation.

Here’s a quote to illustrate her writing

A shadow flits across one of the dark windowpanes of Down House and Thomas is startled. He straightens up, shoves his hands into his pockets and stools to the back gate. Herbs and cabbages grow in a bed where Mr Darwin once cultivated yellow toadflax. The villagers thought it was a mere weed, and of course dahlias and asters are more beautiful, though the nature of beauty is mysterious. By the footpath grow hazel, alders, elms, birches, hornbeam, privet, dogwood and holm oak. Mr Darwin had them planted decades ago. Thomas turns and wanders across the meadow. When the heels of his boots sink into wet earth, the smell of mould wafts out of the long flattened grass.

A book about faith, religion, destiny, bigotry and hope, with accurate and gorgeous nature descriptions. Not a breezy book by any means, but one that’s exquisitely crafted.