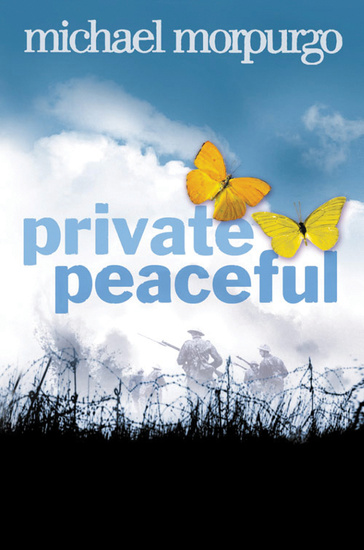 Michael Morpurgo is a famous British Children’s author. Some of you may know him from the Spielberg movie War Horse, which was based on one of his novels. I’ve had Private Peaceful on my piles for a while and I’m really keen on reading it finally. I’ve always wondered how you write about war for children. Especially from the point of view of a soldier. We’ve read the Dutch novel Winter in Wartime last year, but that was set among civilians. So I’m curious to find out how explicit the book will be and where Morpurgo draws the line.

I’m glad that CarolineD made me aware that Private Peaceful and My Dear I Wanted to Tell You (our choice for September) have been chosen by CityRead London 2014. CItyRead London is a project to promote reading across the UK capital.

They’ve gone now, and I’m alone at last. I have the whole night ahead of me, and I won’t waste a single moment of it. I shan’t sleep it away. I won’t dream it away either. I mustn’t, because every moment of it will be far too precious.

Heroism or cowardice? A stunning story of the First World War from a master storyteller.

Told in the voice of a young soldier, the story follows 24 hours in his life at the front during WW1, and captures his memories as he looks back over his life. Full of stunningly researched detail and engrossing atmosphere, the book leads to a dramatic and moving conclusion.

Both a love story and a deeply moving account of the horrors of the First World War, this book will reach everyone from 9 to 90.

16 thoughts on “Literature and War Readalong May 30 2014: Private Peaceful by Michael Morpurgo”