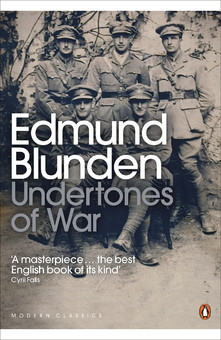 Edmund Blunden’s Undertones of War is one of the most famous WWI memoirs. Blunden was a poet who enlisted at the age of twenty and took part in the battles at the Somme, Ypres and Passchendaele. My edition, which is The University of Chicago Press edition, contains a number of his poems. It will be interesting to compare the accounts of the trenches with the poems inspired by the landscape.

I was not anxious to go. An uncertain but unceasing disquiet had been upon me, and when, returning to the officers’ mess a Shoreham Camp one Sunday evening, I read the notice that I was under orders for France, I did not hide my feelings. Berry, a subaltern of my set, who was also named for the draft, might pipe to me “Hi, Blunden, we’re going out: have a drink.”; I could not dance. There was something about France in those days which looked to me, despite all journalistic enchanters, to be dangerous.

In what is one of the finest autobiographies to come out of the First World War, the distinguished poet Edmund Blunden records his experiences as an infantry subaltern in France and Flanders. Blunden took part in the disastrous battles of the Somme, Ypres and Passchendaele, describing the latter as ‘murder, not only to the troops, but to their singing faiths and hopes’. In his compassionate yet unsentimental prose, he tells of the heroism and despair found among the officers. Blunden’s poems show how he found hope in the natural landscape; the only thing that survives the terrible betrayal enacted in the Flanders fields.