It’s this time of the year again. Spring has started, which means Carl’s Once Upon a Time VIII has begun. The challenge runs until June 21st. Last year I was very active during RIP but couldn’t particpate in Once Upon A Time and felt I had missed out greatly. This isn’t going to happen this year.

I’m determined to read at least 4 books, but I’m not sure I will cover all the genres. For those who don’t know the challenge – the idea is to read fantasy, fairy tales, foklore and/or mythology.

These are some of my possible choices

Shadows is a compelling and inventive novel set in a world where science and magic are at odds, by Robin McKinley, the Newbery-winning author of The Hero and the Crown and The Blue Sword, as well as the classic titles Beauty, Chalice, Spindle’s End, Pegasus and Sunshine Maggie knows something’s off about Val, her mom’s new husband. Val is from Oldworld, where they still use magic, and he won’t have any tech in his office-shed behind the house. But-more importantly-what are the huge, horrible, jagged, jumpy shadows following him around? Magic is illegal in Newworld, which is all about science. The magic-carrying gene was disabled two generations ago, back when Maggie’s great-grandmother was a notable magician. But that was a long time ago. Then Maggie meets Casimir, the most beautiful boy she has ever seen. He’s from Oldworld too-and he’s heard of Maggie’s stepfather, and has a guess about Val’s shadows. Maggie doesn’t want to know . . . until earth-shattering events force her to depend on Val and his shadows. And perhaps on her own heritage. In this dangerously unstable world, neither science nor magic has the necessary answers, but a truce between them is impossible. And although the two are supposed to be incompatible, Maggie’s discovering the world will need both to survive. About the author:Robin McKinley has won many awards, including the Newbery Medal for The Hero and the Crown, a Newbery Honor for The Blue Sword, and the Mythopoeic Award for Adult Literature for Sunshine. She lives in Hampshire, England with her husband, author Peter Dickinson Check out her blog at robinmckinleysblog.com.

On the treacherous streets of Riverside, a man lives and dies by the sword. Even the nobles on the Hill turn to duels to settle their disputes. Within this elite, dangerous world, Richard St. Vier is the undisputed master, as skilled as he is ruthless–until a death by the sword is met with outrage instead of awe, and the city discovers that the line between hero and villain can be altered in the blink of an eye.

Hailed by critics as “a bravura performance” (Locus) and “witty, sharp-eyed, [and] full of interesting people” (Newsday), this classic melodrama of manners, filled with remarkable plot twists and unexpected humor, takes fantasy to an unprecedented level of elegant writing and scintillating wit. Award-winning author Ellen Kushner has created a world of unforgettable characters whose political ambitions, passionate love affairs, and age-old rivalries collide with deadly results.

In contemporary America, an un-named college student sets out on an obsessive journey of discovery to collect and record the life-stories of total strangers. The interviews that follow have echoes of another, far more famous literary journey, undertaken long ago and in another world.
Drawing on the original, unexpurgated tales collected by Jacob and Wilhelm Grimm, six of their most famous works are re-imagined in the rich and endlessly varied landscapes of contemporary America.
From the glass towers of Manhattan to the remoteness of the Blue Ridge mountains; from the swamps of Louisiana to the jaded glamour of Hollywood, New World Fairy Tales reclaims the fairy tale for the modern adult audience. A haunting blend of romance and realism, these stripped-back narratives of human experience are the perfect read for anyone who has read their child a bedtime fairy story, and wondered who ever said these were stories meant for children.

She is never cold, she always knows exactly what time it is, and her hair grows two inches while she sleeps. Fifteen-year-old Corinna Stonewall–the only Folk Keeper in the city of Rhysbridge–sits hour after hour with the Folk in the dark, chilly cellar, “drawing off their anger as a lightning rod draws off lightning.” The Folk are the fierce, wet-mouthed, cave-dwelling gremlins who sour milk, rot cabbage, and make farm animals sick. Still, they are no match for the steely, hard-hearted, vengeful orphan Corinna who prides herself in her job of feeding, distracting, and otherwise pacifying these furious, ravenous creatures. The Folk Keeper has power and independence, and that’s the way she likes it.
One day, Corinna is summoned by Lord Merton to come to the vast seaside estate Cliffsend as Folk Keeper and family member–for she is the once-abandoned child he has been looking for. It is at Cliffsend that Corinna learns where her unusual powers come from, why she is drawn to the sea, and finally, what it means to be comfortable in her own skin. Written in the form of a journal, The Folk Keeper is a powerful story of a proud, ferociously self-reliant girl who breaks out of her dark, cold, narrow world into one of joy, understanding, and even the magic of romance. Franny Billingsley, author of the critically acclaimed fantasy Well Wished, has created a vividly portrayed, deliciously frightening novel that will have readers glued to the pages until the very un-bitter end. (Ages 10 and older)

Thirteen-year-old Sophie isn’t happy about spending the summer of 1960 at her grandmother’s old house in the bayou. Bored and lonely, she can’t resist exploring the house’s maze, or making an impulsive wish for a fantasy-book adventure with herself as the heroine. What she gets instead is a real adventure: a trip back in time to 1860 and the race-haunted world of her family’s Louisiana sugar plantation. Here, President Lincoln’s Emancipation Proclamation is still two years in the future and passage of the Thirteenth Amendment is almost four years away. And here, Sophie is mistaken, by her own ancestors, for a slave.

I’m so glad that Carl’s Once Upon a Time Challenge has started. I have been looking forward to it since weeks. Every since I have finished Robin McKinley’s Chalice and was in the mood to read more fairy tale retellings and fantasy.

If you want to know the details of the challenge, do please visit Carl’s blog. You have different challenge levels and four genres to choose from: Fairy tales, Folklore, Mythology and Fantasy. The challenge runs from March 21st to June 19th. There will be two readalongs as well. The first one in April – Brandon Sanderson’s Mistborn, the second in May – Neil Gaiman’s Neverwhere. I would love to join for Mistborn.

I will be busy in the next few months and so I decided to do The Journey which is only one book.

One reason why challenges are so much fun is the fact that one can make a list. Although I have only committed to one book, I may read more. I want to focus on fairy tale retellings and fantasy this year and here a few of my possible choices. 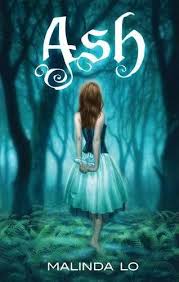 The Rose and the Beast by Francesca Lia Block

The True Story of Hansel and Gretel by Louise Murphy

The Ice Queen by Alice Hoffmann

How about you? What are you going to read?

No matter what I said about challenges at the beginning of the year, forget it. Of course I’m joining the Once Upon A Time Challenge. I loved last year’s R.I.P. hosted by Carl and this is the lighter springtime side to R.I.P’s autumnal darkness. And I love fairy tales, folklore, fantasy and mythology.

There are different levels in the Once Upon A Time Challenge, please go there and find out all about it.

I decided to sign up for the Journey which leaves everything open from reading only one book to as many as I want, fiction and nonfiction.

I’m just about to finish a few fairy tale retellings, so this is timely in any case. I have a few ideas for other books I might read but I’m not sure it’s wise to tell it yet as I have seen in the last few weeks a few projects being left behind due to time constraints. The only book I am sure to review is Red Riding Hood and a few other retellings of the Little Red Riding Hood fairytale.