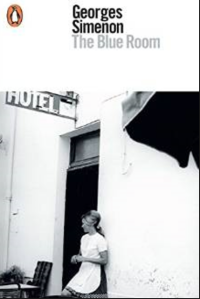 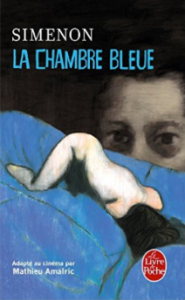 While I’ve read some of Simenon’s Maigret novels, I hadn’t read any of his so-called “romans durs” until now.  Many people say they are far better than the Maigret novels and after having read The Blue Room –  La chambre bleue I think I can understand why. I can also see the influence the romans durs must have had on some newer authors like Pascal Garnier. Luckily for me, I liked Simenon’s novel much more than the Garnier novel I’ve read so far. The Blue Room is excellent.

The book starts with a scene in a hotel room – the blue room. Two people, Tony and Andrée, have just made love and he’s standing in front of a mirror, wiping away blood from his lips. The book starts in medias res, with a conversation. Andrée, who is watching Tony from the bed, is asking him, if she’s hurt him. Apparently she bit his lip. From the way she asks, we can deduce that it wasn’t as accidental as he believes. No, she probably bit him, so his wife will ask questions. What Andrée doesn’t know is that she’s not Tony’s first affair and that his wife is likely to ignore this one just like she ignored the others. Andrée then asks Tony whether he loves her and would love to spend his life with her. Tony’s not very attentive and says yes. A fatal error as the reader will find out very quickly. At the end of the scene in the hotel room, the book seamlessly switches to the examining magistrate’s chambers, where Tony is trying to defend himself in front of a psychiatrist and his lawyer.

The scene in the hotel room is a pivotal moment. From there the book moves backwards and forwards in time, unfolding Tony and Andrée’s whole story, from when they met as kids, to when they became lovers. It also switches from scenes set in the past to scenes in the present in which Tony, who has been arrested, tells his side of the story. The way Simenon has interwoven those narrative strands is pretty amazing. Nowadays, we’d have the different strands either separated by breaks between paragraphs, or chapters. Not so here, which makes it much more fluid, much more like watching a film.

Simenon’s style is hard to describe. It’s unadorned but so precise. Everything he chooses in his descriptions works masterfully. It’s like we’re looking at his characters through a microscope. The tiniest ugly little detail is laid bare.

While I don’t think his books are about suspense, it was suspenseful nonetheless because for a long time we have no clue why Tony got arrested. Nothing in the pivotal scene let’s us suspect that.

The Blue Room is a cruel, bleak analysis of a love affair that goes terribly wrong, written in evocative and pared-down prose. A great little book.

If you’d like to read a more eloquent review of the novel, here’s John Banville’s review of the Blue Room. He goes as far as comparing Simenon to Kafka.

The Blue Room has been made into a movie. I hope I can watch it soon.

This book was on the 20 under 200 list I did last summer. I must admit, I’ve been slacking. I’ve only read five or six from that list.

Last year I felt the urge to read some Maigret and got four books. I reviewed the first Un Noël de Maigret aka Maigret’s Christmas. I liked quite a few things about it and since they are all short, under 200 pages, I thought I might try another one.

I’m not sufficiently familiar with Simenon’s Maigret novels to know which of the two that I have read is the more typical one. All I can say is that I liked the first but I’m completely underwhelmed by the second.

In Maigret et les Vieillard aka Maigret in Society Maigret has to solve the murder of an aristocratic ex-ambassador. He has been shot four times, in his own apartment, in the middle of the night. His old servant found him towards the morning and reports the murder at the Ministry of Foreign Affairs.

Maigret has the pleasure to interview people belonging to the Parisian High Society. A breed he isn’t exactly fond of. Although – typical for Maigret – he never judges people, we still understand how much he disapproves of them and thinks they are all a bit odd.

The Count had a “lover”, a princess, who was married to someone else. For over fifty years he wrote a daily letter to the princess which she would promptly answer. They had intended to get married after the death of her husband which had just occurred before the murder.

Despite the strange habits and a few questionable things he discovers, Maigret doesn’t see a motif or find a suspect.

I’m not sure whether this is a trait of Simenon or the Maigret novels but 80% of the book consists of dialogue. The lack of description and scenes was not to my liking. I love good dialogue but it was a bit average. He got the different talking styles of the people very well but the exchange wasn’t very interesting.

All in all I cannot recommend this novel. I’m also not keen on a detective who smokes a pipe and whose homey wife stays at home waiting for him with the dinner and his slippers …

The thing that I found most interesting is the fact how the books are rooted in their time. The mentioning of the death penalty startled me at first and then I vaguely remembered that the Capital punishment existed in France until the 80s. Should you, for one reason or the other, feel nostalgic about the 60s in France, you might like this.

Since I still have two other books sitting here, my final verdict is outstanding… I already have a feeling that I will have to look somewhere else for a detective series that is really to my liking or stick to those I already know. I think I need to get back to Simenon’s romans durs. They are definitely worth reading.