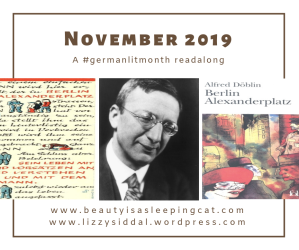 I feel it’s a problematic omission. As I mentioned in the previous post, I’m pretty sure that in writing Berlin Alexanderplatz, Döblin referenced Simplicissimus, which is also divided in books, not chapters, uses a similar structure with short summaries at the beginning of each chapter (there are chapters with long titles in the books). One of Döblin’s later works, the over 1000 pages long historical novel Wallenstein (maybe an excellent choice for next year’s readalong? – just kidding) deals with the 30-year war, the same era during which Grimmelshausen’s famous work takes place. By the time he wrote Wallenstein, he most certainly knew Simplicissimus, but looking at BA’s structure he already knew it then.

But even if these intertextual links wouldn’t exist, I’m not sure why a translator has to change “book” to “chapter”. It seems a bit shoddy.

It was a bit of a shocker and reinforced my earlier assumptions that Döblin likes to emphasize what a strong hold he has on his creature. Poor Franzeken is at his mercy.

I find his concept of man very pessimistic. Not only does it seem that people can’t better themselves, they are also puppets on strings without any freedom. They are driven and things happen to them. Once the “machine infernale” is set into motion, there’s no stopping it. Fate will get you, no matter what. At the time when he wrote this novel, Döblin was an atheist. He’d been army doctor during WWI, and I assume that might have shaken his faith. When he was writing Berlin Alexanderplatz, he was “Nervendoktor”, – psychiatrist. He must have seen his share of tragedy and depravity. All this seems to come into play in his work.

I really like Herbert and Eva. Even crooks have a certain code of honour and while Reinhold is a character that doesn’t know any loyalty or honour, both Herbert and Eva are representative of this roguish code of honour, as I would call it and I like them for that. Yes, Herbert is a criminal and Eva a type of prostitute, or kept woman, but they are loyal to Franz and genuinely care. They help with anything they can.

I thought the reactions were extreme. I can only assume they didn’t like him exposing himself like this and drawing too much attention. The meetings he attends are meetings of the communist party. Franz isn’t even a communist, he’s far closer to national Socialist thinking. I read these sections as criticism of communism. I don’t know anything about Döblin’s political convictions, but maybe anti-communism was his own position.

I find it always helps to know a bit about the author but often it’s not necessary. Not so in this case. I read up quite a bit. I was particularly interested in Döblin’s religion. For someone like me, who grew up in a Catholic environment, this was peculiar to read. While it’s very pessimistic, I also felt it had so many Catholic elements. It was interesting to me to know, while he was born into a Jewish family, Döblin converted to Catholicism. I could already sense it here and it helped me understand some passages and the use of some quotes.