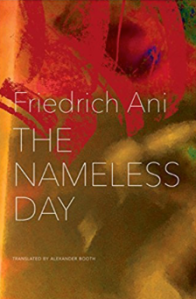 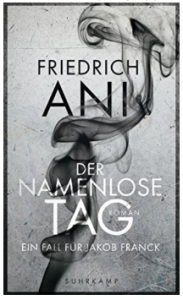 Last May I read my first Friedrich Ani and was extremely impressed (here’s the review). I knew I would read another one of his novels before long. This time I chose the first in the Jakob Franck series, The Nameless Day – Der namenlose Tag. The novel was published in Germany in 2015. The English translation will be published by Seagull Books next month. This is Ani’s fourth series. He also writes standalone novels.

Jakob Franck has been retired for two months. He’s lonely and can’t shake off the dead. They haunt and visit him. When he was still working, Franck used to be the bringer of bad news. Most other police men hated nothing more than telling people that a loved one had died in an accident or been murdered. Ani never thought about it. He did it and he was good at it. He knew how to calm people, knew how to say the right words or was just there for them without saying much. In one case, the suicide of a seventeen-year-old girl, he even held the dead girl’s mother for over seven hours without speaking.

Holding the relative of a dead person for seven hours was unusual, even for Jakob Franck, and so, even twenty years later, he has never forgotten the death of Esther Winther. Still, he’s surprised when the father of the dead girl contacts him. Esther had been found hanging from the branches of a tree. Why the secretive teenager had killed herself had never been found out. There were many rumours. Rumours of an affair with an older man, rumours of abuse, rumours of depression. The father never believed it was a suicide. He always suspected foul play. The mother, the woman Franck had held, killed herself exactly one year later.

Winther knows that Franck wasn’t the investigator at the time and he also knows that he isn’t working anymore, but because he knows that he’s a compassionate man, he hopes he’ll help him find out the truth, track down the murderer.

Franck embarks on a journey of darkness and loneliness. He goes through case files, interviews people, friends and relatives, travels from Munich to Berlin and finally applies his own special method of “Gedankenfühligleit” – which can best be described as some sort of sixth sense analysis. What he uncovers is a web of dark secrets and many lonely people who would do anything for attention and possibly love. Many of the people he meets remind Franck of his own loneliness and trigger profound feelings of empathy and compassion. The ending is surprising.

I liked this novel very much. Ani is the kind of writer even people who don’t normally read crime novels appreciate. His writing and his characters are unusual. He always tries to say things in a fresh, original way. Occasionally that goes wrong. There are a few wonky metaphors and expressions that were a bit odd, but at least the writing’s never tired, always fresh.

While I liked this book, I still found it could have benefitted from a few cuts and more editing. There are some repetitions. And while I love ghost stories, I didn’t feel like it was necessary or brought anything to the story that Franck talks to ghosts of dead people and sees them in his living room. There are only a few instances of those and they are meant to underline how emotional and empathic he is, nonetheless, the book would have been stronger without these element.

The biggest strength of the novel is the exploration of its main theme. There is more than one suicide or suspected suicide in this book, and so it’s fair to say, that suicide is the main theme of the novel. The book shows how devastating it is to lose someone this way, how hard it is to move on, especially when the reasons aren’t clear. And also how cruel it is when someone goes without forewarning. Ani describes both sides well— the side of the person who finally sees no other way and the side of those left behind.