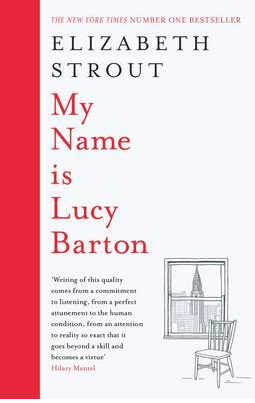 What a beautiful novel. I can hardly believe I haven’t read anything by Elizabeth Strout before. If someone can write a book like this, then surely, her other books must be outstanding too.

Lucy Barton looks back on a time in her life when she spent nine weeks in hospital suffering from a strange illness. Back then, she was married, had two small kids, and was an aspiring author. Lucy comes from a dirt poor family. However, it’s not only poverty she suffered from but cultural deprivation. They had no books, no TV, no radio. Little Lucy was profoundly lonely and that was, she thinks, the reason why she was drawn to books and reading and later to writing. She left her hometown Amgash, Illinois and moved to New York. During her time at the hospital, she often lies away at night and looks at the illuminated Chrysler building. It’s like a beacon. Looking at it helps her ward off feelings of loneliness, gives her hope. One day, she wakes up and finds her mother whom she hasn’t seen in years, next to her bed. Her mother stays five days and watches over her. During these five days, Lucy discovers how profoundly she loves this distant woman and how much it comforts her to know she’s close. The narrative moves back and forth in time. From the hospital room to her childhood and from there to a future with a second husband and a stunning career as a writer.

At times, the novel reminded me of Jenny Offill’s book Dept. of Speculation, but My Name is Lucy Barton is so much warmer, so much more emotional. I absolutely loved it. It explores so many topics. Families, the relationship between mothers and daughters, poverty, loneliness, the artist’s life, New York,  . . .

The voice is very endearing. It’s hard to imagine, this is an accomplished writer talking, the narrator sounds much more like a naïve girl. A very loving one, a girl who tries to find beauty and goodness in everything. It’s endearing and a bit frightening. Another writer would have chosen to throw disaster at her, but not so Elizabeth Trout. She has her character navigate the choppy waters of chance encounters, friendships, marriage and family relationships, without ever being wrecked and going under. There’s heartache, sadness, and loneliness, but Lucy’s always able to see something good and move on. She’s a true survivor. Her childhood sounds horrific. Her parents were abusive, the poverty was brutal. But Lucy survived and everything she’s given, seems like a gift. She stayed true to herself and remained kind and caring and humble.

This may sound a bit mushy, but it’s actually not. The tentative way in which the narrator tries to describe her life, her feelings, gives it great authenticity. At times, it feels like listening to someone talking.

It’s a fantastic book. For readers and for writers. I loved the many complex characters. Some appear only very briefly, like the writer Sarah Payne, who is extremely important for Lucy. It’s Sarah who tells her, that author’s shouldn’t be too concerned with plot as every writer only has one story that he will tell again and again. In Lucy’s case, that story is about trauma. While I’ve seen many authors write about PTSD or childhood trauma, I’ve hardly ever seen anyone, touching this subject in such a delicate way. From war trauma to abuse to AIDS, and 9/11, there’s so much suffering, but it’s like it’s presented behind a thick layer of fabric. Here and there something flares up but it’s never allowed to occupy too much space. It’s pushed back by deep and authentic experience and emotions.

I’ll leave you with a longer quote to give you an impression of the writing. The narrator is talking about her sister, Vicky, and then, as she always does, moves on:

How Vicky managed to this day I don’t know. We were not as close as you might expect; we were equally friendless and equally scorned, and we eyed each other with the same suspicion with which we eyed the rest of the world. There are times now, and my life has changed so completely, that I think back on the early years and I find myself thinking: It was not that bad. Perhaps it was not. But there are times, too—unexpected—when walking down a sunny sidewalk, or watching the top of a tree bend in the wind, or seeing a November sky close down over the East River, I am suddenly filled with the knowledge of darkness so deep that a sound might escape from my mouth, and I will step into the nearest clothing store and talk with a stranger about the shape of sweaters newly arrived. This must be the way most of us maneuver through the world, half knowing, half not, visited by memories that can’t possibly be true. But when I see others walking with confidence down the sidewalk, as though they are free completely from terror, I realize I don’t know how others are. So much of life seems speculation.

I hope that I managed to capture the beauty of this book. It’s such a stunning novel. I can’t wait to read more by Elizabeth Strout.