Swedish-speaking Finnish author and artist Tove Jansson is most famous for her stories featuring the Moomintroll family and their friends. Their creation spans almost thirty years. The first story came out in the 40s, the last in the seventies. When Tove Jansson was in her 60s she began to write books for adults. Some, like The True Deceiver, are novels, other’s, like Fair Play, are a collection of linked short stories, or episodic novels.

I always wanted to read her work, the books for children just as much as the books for adults, and I have no idea why it took me so long. After having finished The True Deceiver and already started Fair Play, I must say, this is one of those writers whose every book I want to read. She’s such an orginal, refreshing, and highly inspiring writer.

Katri and her younger brother, Mats, live in a village, in an unnamed Nordic country. It’s the deep winter. The land is covered in snow. The lake is frozen. Katri has just resigned from a job for the local merchant. Her brother helps building boats, his biggest wish being a boat of his own. In the same hamlet lives Anna Aemelin, a famous, rich children’s book illustrator. She’s become famous for her detailed depictions of the forest, which she adorns with drawings of rabbits. Katri decides that she wants Anna’s money for her brother. And she wants to get it in an honest way. Now honesty is an elastic term and for Katri it seems to mean— speaking the truth. Anna Aemelin has her own idea of what honesty means. And so does Mats.

The blurb of the English edition tells the reader that Katri fakes a break-in at Anna’s house to convince her she needs companionship, that’s why it’s not a spoiler to mention that she and Mats will move into Anna’s big house.

While the plot is interesting, the book’s strength lies in the characters and the setting. These people are so unusual. All three are eccentrics, each in their own way. And their interests, occupations, their innermost being is so original.

The artist Anna Aemelin was the character I enjoyed the most. Before Katri arrives, she’s not even aware of how much money she made with her illustrations. She lives a very ordered life, following the seasons. In winter, she doesn’t draw. It’s a bit as if she was hibernating. She orders food from the shops, doesn’t go out, and spends her days answering fan letters and reading adventure stories for kids. The books will be the foundation of her friendship with the boy Mats, a friendship that will create tensions between her and Katri. In spring, after the thawing, Anna goes into the forest and draws her pictures.

Katri is mysterious. She resembles a mythical figure, how she walks around with her huge, nameless dog, hardly speaking to anyone.

The way they live and communicate with each other is so peculiar because all three characters are loners. The conflicts between Katri and Anna are fascinating because they are both scheming, but both can’t really lie. But does that make them honest?

The story is set during winter and a huge part of its charm stems from the descriptions of the winter landscape, the harshness of the weather, the isolation of the big rambling house.

I don’t want to say too much. Pick it up and discover this unique writer for yourself. It’s certainly going to make my Top 10 of the year.

I read the German translation. That’s why I can’t offer any quotes. As I mentioned earlier, I’ve already started Fair Play, the story of two women artists. It’s another great find. I also want to read her Moomin stories chronologically and have her biography and a few other novels sitting on my piles. So, be prepared, you might read a lot more about Tove Jansson on this blog in the future. 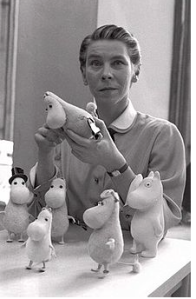