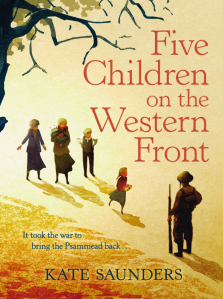 Five Children on the Western Front is a delightful story inspired by E. Nesbit’s famous children’s book Five Children and It. I’m still surprised how much I loved this book. I’m not always keen on sequels of classics, but since I haven’t read Nesbit’s tale yet, I couldn’t compare. And I’m aware that the main character of the book “It” – or Psammead -, the sand fairy, is Nesbit’s creation and not Saunders’, nonetheless her book offers many new elements.

When the five children were younger, they had many adventures with a furry, snooty creature they discovered in a gravel pit. The sand fairy was able to grant wishes and those wishes, which were always over at sunset, transported them back and forth in time. Often with hilarious consequences.

But since then many years have gone by. Cyril, Anthea and Robert are in their twenties, Jane is about sixteen, and the youngest, the Lamb, is eleven and not even the youngest anymore. There’s a sixth child, the nine year-old Edie.

The younger kids were often jealous of their siblings’ adventures with the sand fairy and are overjoyed when they discover the grumpy creature in their gravel pit. It’s the beginning of WWI and the sand fairy is stuck in their world. He cannot go home, he cannot make any wishes. Or only accidental ones. The kids take him home and hide him in a sand bath on the attic.

Like in the first book they have many hilarious adventures. They are even more mysterious this time because the sand fairy can’t control them. Some of the adventures are more troubling than funny. Cyril has enlisted and is soon followed by Robert. More than one wish transports them to the trenches where they become witnesses of the horrors.

The beginning of the book was so lovely and light, I was a bit afraid it wasn’t showing the proper respect for the war, but it turned darker and darker, showing the danger, the seriousness and the consequences of the war. Death and facial disfigurement are as much part of the tale as the changing times— women who leave their homes to become nurses, the first opportunities for women to study medicine.

I’m amazed that Kate Suanders was able to combine two such different moods. The characters are so endearing and their affection for each other is heartwarming. I didn’t want the book to end and will certainly read Nesbit’s story. The sand fairy is such a great creation. He has telescopic eyes, the ears of a bat, long, gangly limbs and a rotund body. He’s smug, nosey, grumpy, selfish and mean. There’s a reason why he returned during the war. He’s done a lot of bad things in his lifetime and has to make amends.

Kate Saunders wrote an interesting afterword in which she writes how she got the idea. She loved Five Children and It as a child and, later in life, realized that these Edwardian children would be part of the generation that had to go to war and was so heavily decimated. Losing her own son at the age of nineteen, helped her give the book emotional depth.

I really recommend this novel. It’s charming and sad. I thought she did well not to modernize it. The children sound like children of the time, which gives the story a nostalgic feel.

I only hope I won’t think differently about it once I’ve read E. Nesbit’s story.

Have you read E. Nesbit? Which of her books do you like best?