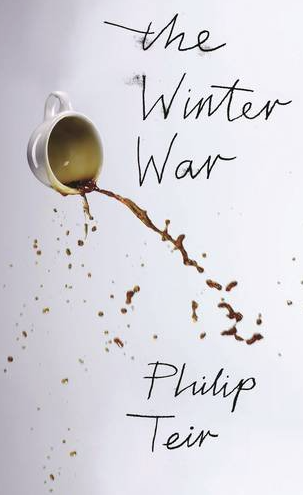 On the surface, the Paul family are living the liberal, middle-class Scandinavian dream. Max Paul is a renowned sociologist and his wife Katriina has a well-paid job in the public sector. They live in an airy apartment in the centre of Helsinki. But look closer and the cracks start to show.

As he approaches his sixtieth birthday, the certainties of Max’s life begin to dissolve. He hasn’t produced any work of note for decades. His wife no longer loves him. His grown-up daughters – one in London, one in Helsinki – have problems of their own. So when a former student turned journalist shows up and offers him a seductive lifeline, Max starts down a dangerous path from which he may never find a way back.

The Winter War is Philip Teir’s first novel but already he’s been hailed as one of the most important young Finnish writers. In a press release, which announced the translation of his book into English, I saw him mentioned as a Swedish author. That’s a bit embarrassing. Philip Teir is part of the Finland Swedish minority in Finland. He writes in Fenno Swedish and his book has been published by a Swedish publisher, nonetheless he was born and lives in Finland.

The title of the book is symbolic and alludes to the Winter War (Talvisota in Finnish – Vinterkriget in Swedish), in which Finland fought against Russia, after having been invaded by Russian forces in 1939. In the book however, the war is mentioned but it isn’t a topic. The major topic is the end of a marriage, embedded in a family story.

I wasn’t so keen on the book at first, because I wasn’t keen on the first narrator, Max, but the book alternates between four narrators: Max, his wife Katriina, and the daughters Helen and Eva. As soon as the book started switching to other narrators, I found it very captivating and was even a little sad when I finished it.

Max is a sociologist and when the book starts he struggles to write a book on Edvard Westermarck. He’s just turning 60 and about to start an affair with a much younger woman. Katriina is on her way to the Philippines to recruit nurses. When she finds out about the affair, he reaction is not exactly as Max imagined it would be. Helen is working as a teacher and has assigned her class to read a novel on the Winter War. When their grandmother has a stroke, it hits her the hardest. The youngest daughter, Eva, lives in London. She studies at an art school and meets people who have joined the Occupy movement.

Teir is a journalist and at times you can feel that. He even indicates his sources at the end of the book, names the authors and ideas which have influenced him. The result is a book that feels uncannily life-like and contains a lot of interesting ideas. I didn’t know Edvard Westermarck but he sounds like a real pioneer and fascinating person. I also enjoyed learning more about the Occupy movement. The thoughts on contemporary art were just as captivating.

The Winter War tells the story of a family in crisis. Each member is unsettled by something and has to make decisions. Not only about marriage and divorce but about choices of profession, ideologies and ways of life.

I was wondering how typical this family was. They live together and come together for important things like birthdays, the illness of the grandmother, the marriage of one daughter, but they each seem to live a completely independent life and have the most profound experiences on their own.

What I liked is that the person who seems the most fragile and directionless is ultimately the strongest and sanest. Maybe Teir wanted to say that those who think they have to make decisions that last a life time are the least suited for our society and only those who embrace flexibility and change are capable of navigating contemporary life and its difficult choices.

Teir has been compared to Jonathan Franzen and I can see why. There are similarities. I enjoyed reading this novel and if you like Franzen, you should pick it up. The Winter War is a highly entertaining, charcater-driven novel of ideas; just don’t expect stylish writing, elaborate descriptions or strong atmosphere. 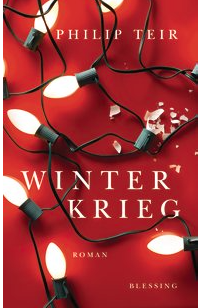 I’ve read the German edition of this book. Finland was the guest of honour at the Frankfort book fair 2014 and Teir’s was one of 120 new translations. I bought a few more and hope to review them soon. Sadly most haven’t been translated so far. I like the German cover and the paper they used for this edition is simply gorgeous and lovely to the touch (Munken Premium).