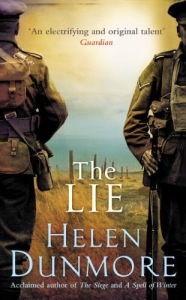 The Lie is not the first WWI novel Helen Dunmore has written. Nor is it her first book about war. While you certainly don’t have to read Zennor in Darkness, or The Siege, or her ghost story The Greatcoat, before you read The Lie, it’s interesting to see how she approaches war from different angles. The Lie is foremost about the aftermath of war. About the scarring, the wounds, in the souls, the bodies, the land.

The Lie is set after WWI in Cornwall. The narrator, Daniel, lives on a forlorn piece of land, overlooking the sea. He’s shell-shocked, but unlike so many other soldiers with post-traumatic stress disorder, who populate literature, he’s taciturn and withdrawn. Even people who know him, like his childhood friend Felicia, would not be able to tell what is going on inside of his head.

I’ve been quiet a long time, I know that. It happens. I go back in my mind. It’s not the same thing as remembering, because it has colour and smell and taste.

The land on which Daniel lives belongs to Mary Pascoe, an old woman, almost blind and frail, who lived outside of society, far from the town, all of her life. WhenDaniel returns from the war, she let’s him seek shelter on her land. When she becomes very ill and blind, Daniel takes care of her and moves into her cottage with her. She makes him promise not to fetch a doctor and to stay on her land once she’s dead.

He takes care of her until her last moment and buries her on her land. Daniel is an able gardener and can live of the land, whose soil is rich. There’s a goat and hens as well. When people start to inquire about Mary, he tell’s them she’s still alive.  The lie will be his undoing.

The story moves back and forth in time, is interwoven with flashbacks of his childhood during which he was friends with Frederick and Felicia, and flashbacks of the war.

I was green as grass. And there was first aid drill, which was like no first aid I ever saw in France. We had a dummy which kept still and didn’t scream, bleed, or stink of shit because its insides were falling out. They taught us to tie a tourniquet, and apply field dressings, and that gas lies in pockets close to the ground long after you think it’s cleared.

You’d think selfishness would be the stronger force, but it turns out that it’s not so. Tell a man to unwrap his puttees, take off his boots, dry each toe individually, examine his feet for sores and rub them all over with whale oil, and tell him if he doesn’t he’ll get trench foot which will cause his feet to go black and stink and maybe even have to cut off — well, you’d think he’d do it. But he doesn’t. He’s cold and wet and dead beat and all he wants is to get some kip. Tell him he’s responsible for the feet of the man next to him, and he does it.

Daniel fights on his own at first and later, with Frederick. Frederick and Felicia come from money, while Daniel is the son of a poor housekeeper. Frederick’s and Daniel’s friendship is tested often due to these class differences; it ultimately survives, because the attachment is so profound.

During the war the class difference almost splits them up, but their friendship survives even this test. It even survives death. We know from the beginning that Frederick is killed in France. We just don’t know how, but assume that Daniel must have witnessed it and feels guilty, as he’s haunted by his death. And by Frederick’s ghost. I thought it was strange that she chose to write another ghost story, right after The Greatcoat, but this isn’t a ghost story. I read the ghost as a symbol for how deeply rooted the trauma of war is.

All at once I know he’s going to come. The dead aren’t tied to one place. He’s as fearful as I am, more maybe. He knows what’s coming to him, and he can’t get away from it. Something’s gone wrong. Thing’s out to stop, once they’re finished, but this won’t stop. They say the war is over, but they are wrong. It went too deep for that. It opened up a crack in time, a crater maybe. Once you fall into it, you can’t get out again. The mud is too deep and it holds you.

Daniel isn’t the only one grieving. Felicia has lost her husband and her brother in the war. When they meet again for the first time, they are both wary. They have changed and are not sure  whether there is more than their connection with Frederick that brings them together, or if there is a possibility of friendship, even love.

The Lie is a poetical story. The flashbacks are so tightly woven into the progressing story that they become part of it. Nothing that Daniel does, doesn’t remind him of the war. When he repairs Felicia’s furnace, he’s transported back to the trenches. When he cultivates the land, and digs in the soil, he’s reminded of the mud in France.

The most beautiful parts are the descriptions of this forlorn country, covered in furze and bracken, smelling of salty sea air and the richness of its soil. But in spite of these beautiful passages, I found the novel and its tragic ending, extremely depressing. And I didn’t get why the lie had such tragic consequences.