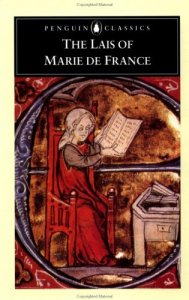 I’ve always been fond of The Lais of Marie de France, a collection of folk tales set in a mythical Brittany. For a book this old, they are surprisingly approachable and entertaining. Marie de France’s identity isn’t clear. She is, as indicates her name, most probably from the Île de France and it’s said that she must have spent some time at the English court.

Looking for something to read for  Once Upon a Time I remembered her werewolf story Bisclavret. Bisclavret means werewolf in Breton. In the rest of France he’s called “loup-garou”. The werewolf belief is widespread in Brittany. I myself grew up with it, as my grandmother was from Morlaix, in Brittany.

I didn’t remember the whole of the story and was surprised to find similarities with Selkie stories, in which it’s crucial, that the Selkie, once a woman, should find her skin again, or she will never be able to return to her Selkie form. Bisclavret follows a reversed logic. The clothes of the man equal the skin of the Selkie.

Bisclavret tells the tale of a gentle woman who is upset because her husband is absent regularly. She presses him to tell her where he spends his nights. She suspects he has taken a mistress. The husband does at first not tell her what he is doing during full moon nights, but when he sees her jealousy, he gives in and confesses that he is a werewolf. During full moon nights, he goes to the forest, takes off his clothes and transforms. It’s vital for him to put his clothes back on. Should anything prevent that, he wouldn’t be able to become human again.

Bisclavret is one of many stories among the Lais whose female protagonist is a “femme coupable” – a guilty woman. In this case she is guilty of betrayal. She herself takes a lover, tells him her husband’s secret and, one night, they follow him and steal his clothes. He is now condemned to stay a wolf. Hunted down by the king and his men, he is spared, because he shows a gentle nature. He follows the king to the court and becomes his pet. He is liked by everyone at court because he is so well-behaved, until one day he attacks a man and later a woman.

I’m not going to reveal the end because I’d like to put you in the mood, to pick up either the whole collection or at least this story.

Marie de France is one of the very earliest story tellers. Her art is still fresh and powerful today and well-worth discovering. My edition is bilingual old French/new French. I don’t know whether there is a French version in the English edition, or whether it’s only a translation.

This post is a contribution to Carl’s Once Upon a Time Challenge. The review site can be found here.