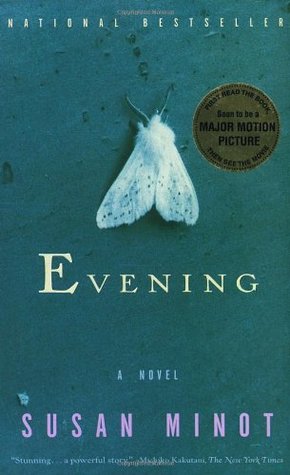 With two novels and one short story collection published to overwhelming critical acclaim, Susan Minot has emerged as one of the most gifted writers in America, praised for her ability to strike at powerful emotional truths in language that is sensual and commanding, mesmerizing in its vitality and intelligence. Now, with Evening, she gives us her most ambitious novel, a work of surpassing beauty. During a summer weekend on the coast of Maine, at the wedding of her best friend, Ann Grant fell in love. She was twenty-five. Forty years later–after three marriages and five children–Ann Lord finds herself in the dim claustrophobia of illness, careening between lucidity and delirium and only vaguely conscious of the friends and family parading by her bedside, when the memory of that weekend returns to her with the clarity and intensity of a fever-dream.

It’s not easy to capture the beauty of Susan Minot’s gorgeous and ambitious novel Evening. If Virginia Woolf or Proust had written page-turners, that’s what it could look like.

In beautiful prose which explores how memory and consciousness work Evening captures the story of Ann Grant’s life. It is 1994 and Ann is terminally ill; she’s lying in her bed, drifting in and out of consciousness. Scent transports her back in time. The morphine induces hallucinations, which are rendered in brilliant stream of consciousness paragraphs. These chapters and paragraphs, are very short, fragments only; the main story however simply moves back and forth between 1994 and 1954, the summer in which she met Harris Arden.

She smelled the cushion and smelled the balsam and what happened to her then was a kind of wild tumult. The air seemed to fracture into screens which all fell crashing in on one another in a sort of timed ballet with spears of light shooting through and something erupted in her chest with a gush and in her mind’s eye she saw her hands forty years younger and heard the clink of rocks on a beach and the sound of a motorboat and rising behind that came a black night and a band playing in the trees and the smell of water in the pipes of a summer cottage and she raised her hand to keep the cushion there and breathed in and heard an old suitcase snap open.

While Ann is remembering four days in 1954, when she met Harris, her grown-up children, her friends and nurses flutter like moths in the periphery of her bed. Ann is given morphine and more often than not, she’s not lucid but hallucinating. One moment she remembers something that happened in 1954 and the next moment a noise in her bedroom changes everything, makes her imagine something; another moment later, she’s back with her visitors.

Her children hear her talk to an invisible stranger, Harris, but when they ask her about him, Ann denies knowing a person with that name.

The story is divided into several recurring elements. There is the story of the four days in summer 1954, the stream of consciousness elements in which Ann sees her whole life pass, the passages in which we hear her children talk, and very short passages in which Ann seems to be talking to Harris who has come to visit her. His visits take place in her imagination but for her this seems more real than anything else.

Evening questions what is left of a life when it comes to its end. Memories, dreams, illusions, are all the same, when you look back. Ann has been married three times. Some marriages were good, others were bad, but now that she is dying, Harris, the unlived possibility, is the strongest memory she has.

First she was Ann Grant, then Phil Katz’s wife then Mrs Ted Stackpole then Ann Lord. Bits of things swam up to her, but what made them come. Why for instance did she remember the terrace at Versailles where she’d visited only once, or a pair of green and checkered gloves,  photograph of city trees in the rain?It only demonstrated to her all she would forget. And if she did not remember these things who would? After she was gone there would be no one who knew the whole of her life. She did not even know the whole of it.

Although the narrative is fragmented and modernist in places, the book has the qualities of a page-turner. At the beginning we only know that Ann Grant met Harris in 1954 and that they both fell in love. It will take the whole book to reveal what has happened and why, after all these years, she still remembers him as if it had been yesterday but never told anybody about him.

Underlying this remembrance of things past, lies a very crucial topic: pain medication in palliative care. It’s briefly mentioned in the book that Ann Lord decided to be medicated although she knew she would probably spend her final weeks, days and hours not being lucid. Some cancer patients prefer lucidity and live their final moments with as much pain as they can possibly endure. Not Ann.

It’s a beautiful book and strangely uplifting. Possibly because it testifies how intense an interior life can be and that nothing is really lost. Everything we’ve ever experienced, imagined or dreamed is still somewhere. In its best moments Evening reminded me of Virgina Woolf’s The Voyage Out, in which we often see people or houses from outside. They are motionless or sleeping, but we catch a glimpse of their inner lives, which are rich and deep and passionate.

Evening has been made into a movie with Claire Danes, Vanessa Redgrave, Glen Close, Toni Colette, Natasha Richardson and Meryl Streep. It doesn’t capture what made the book so wonderful but it’s still a beautiful movie.