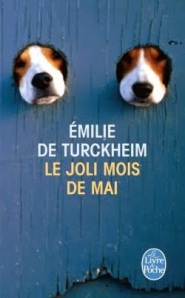 Aimé, the narrator of Émilie de Turckheim’s short, dark, mean novel, cannot tell a story. Or that’s what he tells us. He’s not cultured, hasn’t had an education and, frankly, he seems a bit simple. A simpleton even. But it’s his story and his voice, which make this novel such a fun read, infused with black humour and full of absurd, comic situations. Just like child narrators and teenagers à la Holden Caufield, Aimé sees through the hypocrisy around him. He’s very literal and the way he unveils how people  lie with clichés and empty rhetoric, makes you laugh and gasp in horror at the same time.

You could call Le Joli Mois de Mai a very dark crime story. Monsieur Louis is found dead in the woods, a bullet in his throat. How did he die? And will he be the only victim? These are the questions we ask right away. And Aimé is willing to answer, only in his own time, and before we know the truth, we will hear a dark story of a teenage mother, abuse, violence, alcoholism and exploitation.

Monsieur Louis is dead and he has left a will. Five people will inherit everything. It should be surprising for the five heirs that Aimé and the horribly disfigured Martial, who have been living with Monsieur Louis, don’t get anything else than the right to stay at Monsieur Louis’s house. The five people who inherit the pension, the hunting grounds and the wood are a shady couple, an ex-policeman, an ex-soldier and a gay brothel owner. Greed clouds their judgment and influences their behaviour; they never wonder why would Monsieur Louis leaves everything to people he hardly knew.

I enjoyed finding out. I loved the way Aimé tells his story with so much naiveté and uncanny truthfulness. I laughed out loud quite few times, it’s so funny. It’s a shocking story, told in some of the blackest humour I’ve ever read.

The bad news – the book hasn’t been translated into English.

I first read about the author on Emma’s blog (Book Around the Corner). She’s reviewed one of her other books, Héloise est chauve (here). It sounds excellent as well. I hope Émilie de Turkheim will be translated. She’s a terrific writer. The voice was amazing, the way the story was told was shocking, funny and captivating. Her style is unique and from what I can see, all of her books are very different.