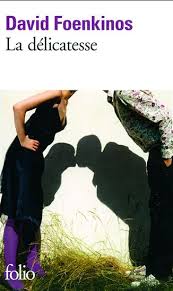 Natalie isn’t certain of anything anymore. One minute she was a happily married young woman, successful in her career, and convinced the future was full of promise. But when her husband was run over by a car, her whole world was turned upside down. Years later, still bruised with grief but desperate to move on with her life, she impulsively kisses her colleague Markus. For Natalie, the kiss is just a gratuitous act. For the awkward, unassuming Markus, it is the moment at which he falls hopelessly, helplessly in love. But how will he ever convince such a beautiful, intelligent but confused young woman that he is the man who can bring her back to life?

I read a review of Delicacy – La délicatesse on Emma’s blog (here) last year and thought it sounded nice. And it really is a charming book. While it will not knock you off your feet, it’s entertaining and quirky and some elements reminded me of Alain de Botton’s first novels.

The story can be summarized in a few sentences. Nathalie is a young widow who struggles to go on living. For three years she is in a sort of limbo until, one morning, she kisses one of the men from her company. An unimpressive, invisible Swedish guy named Markus. What doesn’t mean much for her and was just a very weird whim, means the world to Markus. They are, as one would say, not in the same league. She is incredibly attractive and beautiful while nobody even notices him.

Charles, their boss, is equally in love with Nathalie which complicates things even more. When Markus asks Nathalie out, she accepts although she isn’t really in the mood. How surprising to find out that this plain-looking man is far from ordinary.

I’m sure this sounds like a pretty usual romance but what makes Delicacy worthwhile is the way in which it is told. The story is divided into 117 chapters, some of them not longer than a sentence, some a few pages long. While the story is told chronologically, many of the short chapters contain quirky remarks, information on things that happened or were said in the preceding chapter, a recipe for a dish, the star signs of the co workers. Additionally there are footnotes making generalizing remarks like “Women called Nathalie are often nostalgic”.

All of these comments and annotations may seem random and silly at first but after a while you realize that Foenkinos’ main themes are prejudice, preconceptions and generalisations and that what he does is quite clever really. He confronts the reader constantly with this type of thinking, with his own prejudices. We are all biased to a certain degree. We associate characteristics with nationalities and even with names. Some research has found out that children are treated differently at school depending on their names.

Gossip is one way to let loose all those preconceptions and faulty ideas about others. Someone walking by without saying hello may just have a bad day while people who see him will interpret this behaviour in different ways “Maybe someone has died”. “He has been reprimanded by the boss”. “He is very ill”… . This is exactly what Nathalie and Markus face once people notice that they have met outside of the company.

I don’t want to spoil the book, so I’m not going into too many details but once you finish, you will see how different the “perfect” relationship between Nathalie and her good-looking dead husband is from how Nathalie and Markus interact.

La délicatesse – Delicacy is charming and amusing. It tells a sweet love story and at the same time manages in a very playful and light way to make us aware of our short comings when we meet new people and judge them sometimes for no other reasons than their name and nationalities.