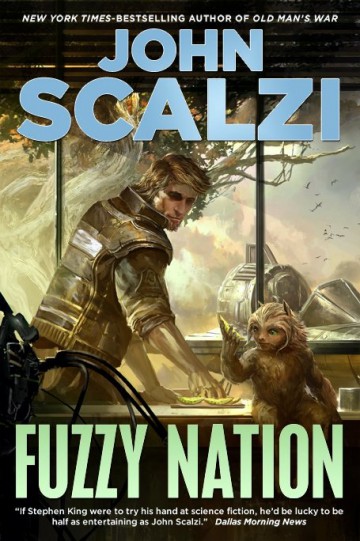 Sometimes I’m easy to please. It took John Scalzi less than one page to win me over with his novel Fuzzy Nation.

Jack Holloway set the skimmer to HOVER, swiveled his seat around, and looked at Carl. He shook his head sadly.

“I can’t believe we have to go through this again,” Holloway said. “It’s not that I don’t value you as part of this team, Carl. I do. Really, I do. But I can’t help but think that in some way, I’m just not getting through       to you. We’ve gone over this how many times now? A dozen? Two? And yet every time we come out here, it’s like you forget everything you’ve been taught. It’s really very discouraging. Tell me you get what I’m saying to you.”

Carl stared up at Holloway and barked. Carl was a dog.

The idea that the book is told by a main narrator whose best friend is a dog to whom he speaks as if he was a human, amused me so much. The best thing however was that the whole book didn’t disappoint. It was not only a fun and charming read from beginning to end, but interesting and thought-provoking as well.

John Scalzi is said to be the most accessible Sci-Fi author writing today. I can see why. Not only does he write in an engaging way, but he has a knack for dialogue and great characters and a wonderful sense of humour. He’s also far more accessible than others because his world-building is minimal. Just a touch of description here and there to set the scene, but nothing that over stretches your imaginative muscles. As much as I like sci-fi, when the world-building is too detailed, my eyes glaze over and I simply can’t see the worlds that are described. Another reason why Scalzi is easy to read is his use of older material, which we may be familiar with. Fuzzy Nation, for example, is a “reboot” of Little Fuzzy by H. Beam Piper.

The central theme of Fuzzy Nation is the question: What makes a sentient being? Jack Holloway is a contractor for ZaraCorp a huge corporate company who exploits foreign planets. While working on the planet Zarathustra, Jack accidentally explodes a cliff and discovers a seam of unimaginably precious jewels. Legally, ZaraCorp is allowed to exploit this seam and give Holloway his share, but only if the planet is really not populated by sentient beings. So far only two other sentient species have been found in the universe.

Jack lives outside of the city, in a tree house, high above the raptors who populate the forest below. One day cute furry creatures come to stay at his house.  Jack is amazed how intelligent they are, but when his ex-girlfriend , biologist Isabel, tells him she thinks they are not animals but people, Jack is reluctant to accept that. He would never harm the Fuzzys. He would never harm any animal, but he doesn’t think they are people. After all, they don’t speak. Or do they? In any case, it would be awful for him, if they really were people, because he would lose the prospect of making millions.

Fuzzy Nation isn’t only an adventure story, in which cute little animal-people are suddenly in great danger and other people have to make some tough decisions, it’s also an exploration of what makes a human. Is it understanding, intelligence, dexterity, the aptitude to use machines or language? In any case, once you’re declared a sentient being, you have the right to possess things. Before that, everything you own can be taken and destroyed.

I have discovered a new favourite author and I’m sure I’ll read more of his novel in the future.