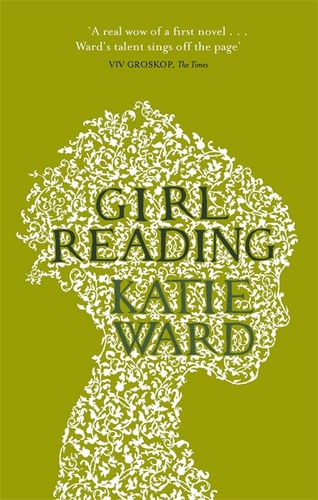 Katie Ward’s Girl Reading is called a novel which is slightly misleading as what it really is, is a collection of seven episodes with a similar theme which are tied together by the last one. Each of the episodes or scenes is set in another time and place, 1333, 1668, 1775, 1864, 1916, 2008, 2060. The way it is tied together, with a final scene set in 2060, gives the whole book a futuristic finish. I knew all this before I started the book but what surprised me was the writing which is quite dense, elaborate and heavily influenced by other books and tales, and, of course, paintings as the linking idea are portraits of reading women or girls seen through the ages.

Most of these “stories” are mysterious, that’s why I chose to call them episodes. They are like small windows that open up on scenes set in the past. We hardly ever get all the background information and often don’t know what will happen to the characters later.

Each of the scenes describes the challenges of women in their respective time and the girl or woman chosen for the portrait is mostly not exactly in line with what is expected of a woman at the time. The fact that the challenges and problems women face stay so similar from the 14th to the 21st century is somewhat unsettling.

Of the 7 stories or episodes I really liked four a lot. The first one, set in Siena, and the second, set in the Netherlands, were not so much to my liking nor was the last set in the future. In the case of story 1 and 2 I had a feeling I have read the exact same stories before, especially the second which was very similar to Girl with a Pearl Earring. Too similar.

I thoroughly enjoyed story 3, set in 1775 in which a female painter comes to the estate of a noble woman to finish the portrait of her lover. The lover, a woman as well, has left and the abandoned one is depressed and morose.

Story 4, set in Victorian England, was another favourite despite the fact that it resembled Audrey Niffenegger’s Her Fearful Symmetry. It’s a tale of two psychic twins. One becomes a photographer, while the other tours the world as a famous medium. It’s a wonderful story and the decor, clothes, atmosphere, are lush and evocative.

Story 5 is another wonderful story. The girl in the center will be a painter in the future but at this point in time she is a slightly silly young girl, infatuated with a painter. What is wonderful is the intensity with which she experiences life. Everything she does – smoking, drinking, falling in love – she does for the first time and savours every minute. Even being heartbroken as it seems.

While I liked some of the stories, I think story 6, set in a Shoreditch bar in 2008, was the most original and rounded of the stories. We get to know much more about the character in this story than about any other of the characters. She is a young black Tory who wants to become member of the Parliament. At the same time she has to decide whether she should get married or not. I liked the way she was described and how descriptions of the most mundane struggles, like wearing shoes which were new but painful, were interwoven with heavy decisions.

I enjoyed some of the stories a lot but as a novel Girl Reading didn’t work for me at all. While the last story, set in the future, gave it an interesting twist, it didn’t manage to really tie them all together. As a whole I found the book a bit artificial which is certainly due to the elaborate and somewhat forced writing. On top of that a few of the stories were too similar to other books I’ve read to be entirely satisfactory.

I’ve read the book along with Rikki and am looking forward to hear what they thought.

If anyone else has read this I would like to know which of the stories you liked best and whether this worked as a novel for you or not. Looking back, I think that story 6 was my favourite because it was the only one that didn’t feel like a pastiche.

If you’d like to see the paintings the stories are based on here is the link to Katie Ward’s site where you find the links.