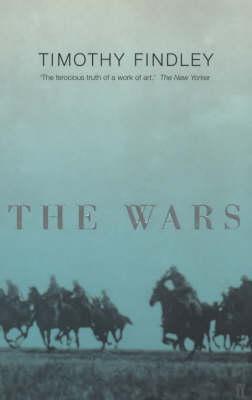 Is it possible to write about WWI – including the trenches, the incapable high command, shell shock, gas attacks, rats, mud, facial wounds, the immense body count – and still be original and have something profound and thought-provoking to say? Before reading Timothy Findley’s  The Wars I might have said “possibly” but after finishing it, I have to say “definitely”. This novel proves that in the hands of a powerful writer anything can become extraordinary.

The Wars has an episodic structure but still tells a coherent story, exploring what happened one day, during WWI, when young Officer Robert Ross, broke the ranks, committing an act of total insubordination, shot another officer and freed dozens of horses. How did it come to this? The story is told in a circular way, starting with the end, withholding all the vital information, and then moving back to  the beginning, unfolding every step which led to that fatal day.

I said in my intro post that I was worried the book would contain a lot of animal suffering and it did but in an unusual way. The strength of Findley’s work is that he manages to show, just like Coetzee – another defender of animals – that, at the end of the day, animals and humans are equal. Both feel pain; their lives are precious and must be protected. Being alive is nothing short of a miracle.

In another hole there was a rat that was alive but trapped because of the waterlogged condition of the earth that kept collapsing every time it tried to ascend the walls. Robert struck a match and caught the rat by the tail. It squealed as he lifted it over the edge and set it free. Robert wondered afterwards if setting the rat free had been a favour – but in the moment that he did it he was thinking: here is someone still alive. And the word alive was amazing.

The instances in which animals die at the hand of men who have gone crazy or are saved by compassionate men are numerous. Madness is an important topic in this novel. Not just in the sense of war is madness but because people lose their minds during battle or under attack. And often they take it out on weaker ones. Wounded Germans, prisoners or animals.

This – to Bates – was the greatest terror of the war: what you didn’t know of the men who told you what to do – where to go and when. What if they were mad – or stupid? What if their fear was greater than yours? Or what of they were brave and crazy – wanting and demanding bravery from you?

Life in the trenches is constant terror, trying to stay sane and attempting to survive.

Robert had only taken eight hours sleep in the last three days. He was living on chocolate bars and tea and generous portions of rum which he took from the supply wagons. His body was completely numb and his mind had shrunken to a small, protective shell in which he hoarded the barest essentials of reason.

The novel is divided in many short chapters which could be read separately but definitely work as a whole. This isn’t a collection of snapshots, it is a novel but this approach of unfolding the story in short chapters, which change point of view, narrative technique, tone and mood, make every part very powerful. Findley is probably one of the most assured writers I’ve read. This could have been difficult to read but most chapters contain strong and expressive scenes. There is far more show than tell in this book, which makes it accessible but also painful. Death, pain, loss and grief are described in a civilian setting and during war, and finally illustrate that love is all that counts. War is mad, inflicting pain is mad and treating people without respect is mad as well.

What came as a surprise were the many funny moments in this book. Rodwell is an officer who saved some injured animals after an attack

“Where did you find the hedgehog?” Robert asked.

“Under a hedge,” said Rodwell.

“I suppose that means you found the bird in the sky,” said Devlin.

“Would that I had, Mister Devlin,” said Rodwell. “No sir – I found him with the hedgehog. They were crouched there side by side when I got them by putting out my hand to secure the toad. We were all there together, you see. It was a popular hedge just at that moment.”

There are many other funny moments. I was glad for those, otherwise the book would have been really dark.

The Wars is populated by likable characters which makes it a painful read. There are not many men or animals who survive in this book. It’s not too gruesome as wounds and pain are not dwelt on but it has many explicit moments which make it an equally beautiful, powerful and painful read.

Anna (Diary of an Eccentric)

The review is also a contribution to The Canadian Book Challenge.