There have been requests last year and then a rumour started to spread and now it’s official: July is Spanish Literature Month. Stu (Winstonsdad’s Blog) and Richard (Caravana de recuerdos) who co-host this event have organized a watchalong (Carlos Saura) and two readalongs (Juan Carlos Onetti A Brief Life and Enrique Vila-Matas Bartleby and Co.) but if you cannot make them you are free to choose whatever you like. If you want to join, just leave a comment at one of the two blogs. Here’s Stu’s intro post and here the one by Richard. 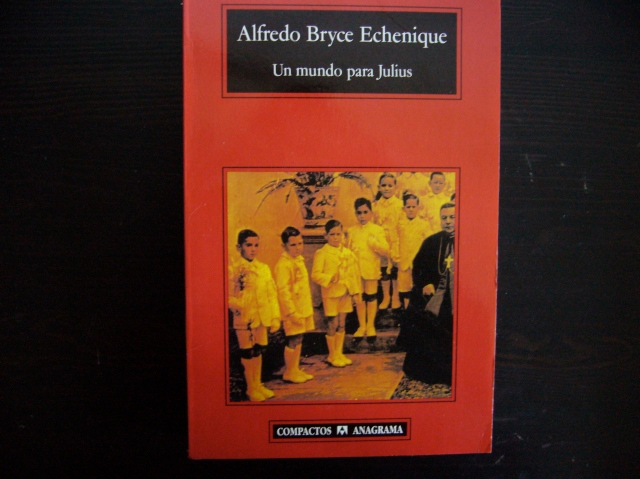 As you can see I have an idea what I would like to read. Since I may not be able to read a lot, I want at least to read one of the books I have in Spanish. A few years back I bought Un mundo para Julius by Peruvian writer Alfredo Bryce Echenique. I like books about the end of an era. They are usually lyrical, nostalgic and melancholic. This seems to be no exception.

It has been translated into English as A World for Julius.

Julius was born in a mansion on Salaverry Avenue, directly across from the old San Felipe Hippodrome.” Life-size Disney characters and cowboy movie heroes romp across the walls of his nursery. Out in the carriage house, his great-grandfather’s ornate, moldering carriage takes him on imaginary adventures. But Julius’s father is dead, and his beautiful young mother passes through her children’s lives like an ephemeral shooting star. Despite the soft shelter of family and money, hard realities overshadow Julius’s expanding world, just as the rugged Andes loom over his home in Lima. This lyrical, richly textured novel, first published in 1970 as Un mundo para Julius, opens new territory in Latin American literature with its focus on the social elite of Peru. A member of that elite, Bryce Echenique incisively charts the decline of an influential, centuries-old aristocratic family who becomes nouveaux riches with the invasion of foreign capital in the 1950s. A World for Julius, his first novel, marks the first appearance in English of this important Peruvian writer, whose Latin American postmodern fiction has won critical acclaim throughout the Spanish-speaking world.

I may end up reading something less challenging in terms of pages. Two authors I like a lot are Almudena Grandes from Spain and Maria Luisa Bombal from Chile. I still have some of their books I have not read.

The crime novels by Teresa Solana A Not So Perfect Crime and A Shortcut to Paradise are possible choices as well.

Or another Peruvian author. I just recently got Vargas Llosa’s Death in the Andes – Lituma en los Andes.

Set in an isolated, run down community in the Peruvian Andes, Vargas Llosa’s riveting novel tells the story of a series of mysterious disappearances involving the Shining Path guerrillas and a local couple performing cannibalistic sacrifices with strange similarities to the Dionysian rituals of ancient Greece. Part-detective novel and part-political allegory, it offers a panoramic view of Peruvian society; not only of the current political violence and social upheaval, but also of the country’s past, and its connection to Indian culture and to pre-Hispanic mysticism.

I have read Juan Carlos Onetti before and liked him very much. To make sure that I really read at least something, I will join the readalong of A Brief Life. The details can be found on Richard’s and Stu’s blog.

I could suggest some other books but I think Stu and Richard are doing a great job at pointing out books you should discover.

Are you joining as well? What are you going to read? Do you have favourites of Latin American and Spanish literature?