During World War Two, 131 German cities and towns were targeted by Allied bombs, a good number almost entirely flattened. Six hundred thousand German civilians died a figure twice that of all American war casualties. Seven and a half million Germans were left homeless. Given the astonishing scope of the devastation, W. G. Sebald asks, why does the subject occupy so little space in Germany s cultural memory? On the Natural History of Destruction probes deeply into this ominous silence.

This is one of the most amazing books I have read this year. For numerous reasons. It is in line with the topic of my reading projects and readalong and contains descriptions that I have never read like this. On the other hand it gave me the opportunity to see another side of Sebald. One that I didn’t expect. If you are familiar with his fiction, notably if you have read them in the German original, you know that he is a very challenging writer. His sentences follow a rhythm that is very much his own. He tends to use old-fashioned and also invented words. And as far as I know he is not very humorous. The two essays contained in the German original of this book, the first on the description of the destruction of the German cities in German literature  – or rather its absence – and the second on Alfred Andersch are so different from his fiction. The style is fluent, accessible and he is extremely funny. The essay on Andersch made me laugh out loud. Sebald’s analysis and description of this conceited writer is hilarious. But that essay is not the topic of my review. I’d like to focus on Sebald’s Luftkrieg und Literatur whose English title is On the Natural History of Destruction.

The book is based on Sebald’s lectures which he held at the university of Zürich in 1997. Those lectures had the impact of a bomb. What Sebald stated was outrageous and had never before been said like this and analyzed with so much detail and force.

What Sebald does in this book, and that is why it is so amazing, is showing what post-war German literature failed to do and doing it at the same time.  It is a reproach and a demonstration how it should have been done.  Some of the descriptions are not for the faint-hearted, they are quite gruesome.

When I started to read I was puzzled at first because he wrote that hardly any German writer had tried to describe the enormity of the destruction of the German cities. I thought he was wrong in stating this but soon enough I understood why I thought so. I’ve always loved Heinrich Böll. Especially in my early twenties he was my favourite German writer and I read most of his books, one of them The Silent Angel. For some reasons I didn’t know that this book had been written in the 50s and was never published because editor and writer thought the topic was inappropriate. Together with Gert Ledig’s novel The Payback (possible choice for next year’s Literature and War Readalong), it is the only Western German book that chose the massive bombing and its aftermath as topic. Only, The Silent Angel had to wait almost 40 years for its publication.

Sebald analyzes in great depth why these were two of the few books. If I hadn’t seen the corny TV production Dresden I wouldn’t have had such a good idea about what it meant to bomb a city as radically as the German cities were bombed. That’s why I would urge you to watch Dresden (forget about the romance).

There are a few things that Sebald underlines. First how widely those cities were bombed. The RAF flew 400’000 missions dropping one million tons of bombs on 131 cities, some of which were flattened completely. 600’000 civilians lost their lives, 7’500’000 were homeless.

The second thing Sebald shows is that these are simply numbers. They seem enormous but they don’t let you experience what it meant to have been in one of those cities during the bombing or to have lived in one of them afterwards. There are accounts of this, like in the books of Nossack, but apart from that a lot of the documentation comes from foreign journalists. German writers and diarists hardly mention anything. As mentioned before, one of the rare writers who didn’t shy away from the topic was Gert Ledig. Already his first novel The Stalin Front or Die Stalinorgel depicted explicitly the atrocity of the Eastern Front. In his later work Payback aka Vergeltung he wrote in great details about the destruction. Unlike Böll’s novel, Ledig’s were published but he wasn’t republished and was finally forgotten, even excluded from the collective memory, as Sebald writes.

But what did Germany want to hush up and why?

When you bomb a city like they bombed the big German cities what follows is a huge surface fire followed by a firestorm that will make everything burst, sear and singe everything and was literally an extremely strong wind that blew even bodies away. What this heat does to a body is described by Sebald, mostly quoting Nossack, in gruesome details. What is also described is what happens later in a city full of rotting corpses. Rats will swarm the place. The stink will be insufferable and the flies unbearable.

This massive destruction and its aftermath filled the Germans with shame, according to Sebald. That’s why they didn’t want it mentioned, started to repress it. They even went as far as saying the bombing had a good side. Many of the old buildings would have needed renovating anyway, many of the factories were dated. Rebuilding was cheaper than tearing down and rebuilding afterwards. This is amazing thinking. The Wirtschaftswunder made the rest. The incredible efforts put into rebuilding and the economic growth helped the Germans forget and repress.

On the other hand, as Sebald states, it would have been rich of Germany to complain after having tried to exterminate a whole people and bringing war and destruction on everyone. As proof of this reasoning he mentions that the British never tried to repress the Blitz. It was a topic in books and documentaries and mentioned in various other forms of writing.

This urge to repress could even be seen immediately after the bombings. Sebald quotes Nossack twice on this. He describes a woman who was seen cleaning her windows. The house in which she lived was the only house in the whole neighbourhood that hadn’t been destroyed. He also saw people sitting on a balcony, drinking coffee although the house and those next to theirs were the only ones left intact.

As is usual in Sebald’s books there are a lot of photos which add another dimension to this excellent book. I think this is an absolute must-read for anyone interested in German literature, post-war Germany, the mass destruction of the German cities and the psychological mechanics of repression.

Don’t forget to visit Lizzy’s blog. Tomorrow she will review Alina Bronsky’s The Hottest Dishes of the Tartar Cuisine. 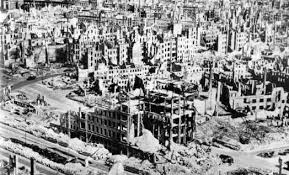