Paris in July is an event hosted by Book Bath and Thyme for Tea. I think it should appeal to many as you can contribute almost anything as long as it is about something French (not Paris only).

All you have to do is either read a French book, watch a movie, share a recipe, post something on French art or architecture, write a travel piece or share your favourite French music. It is up to you.

I am, as usual, tempted to contribute many things but July is my busiest month work wise, therefore I’ll try to not put the bar too high. But let me share a few plans.

The July’s book for my Literature and War Readalong is Marguerite Duras’ Hiroshima mon amour. I will review the book and the movie.

I’m tempted to read and even re-read some Colette. I have never read her novel La Chatte, it would be a great choice for me. But I might also re-watch Chéri starring Michelle Pfeiffer and finally read the eponymous book as well. Zola’s Le ventre de Paris is also an option especially since there is a certain actuality to the topic as Les Halles, as I knew them all my life, are being torn down at the moment. Now these are just a few choices but my French reading pile is huge, I will certainly find something.

I could also imagine a post on French writers and their black cats. 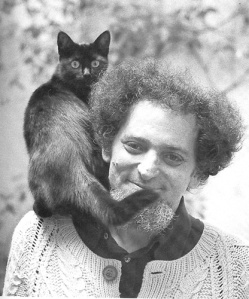 I also have quite a little pile of DVDs here. I recently bought a Jean Gabin collection. I already watched Le Quai des Brumes and La Grande Illusion but there are some others that are very good. Another option is watching Les Misérables starring Gérard Depardieu. And I wanted to re watch the movie Paris, je t’aime. Despite it’s title it isn’t very clichéd.

I wanted to go to Paris in July but my workload will not allow it. Instead of that I might share a few extremely nice books on Paris that I found last year. There are a lot of themed guides around that are really interesting.

My favourite French painter is Gustave Caillebotte. He painted Paris like not many others. I might write in more detail about his work and background.

When I think of French music, the first that comes to my mind is Air. I have all of their CD’s but I’m sure that’s not what people usually have in mind when thinking of French music. I’m also a huge fan of Edith Piaf. And there are many others that I could write about.

I hope this gives you an idea and tempts you as well. If you would like to sign up too here is the link.