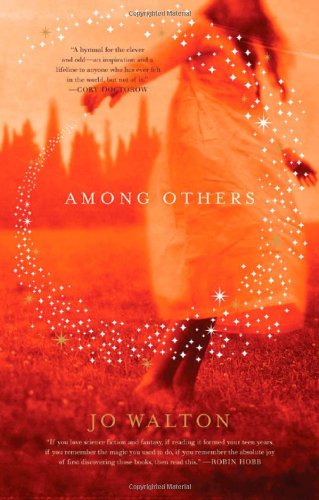 With a deft hand and a blazing imagination, fantasy writer Walton mixes genres to great effect. Elements of fantasy, science fiction, and coming-of-age novels combine into one superlative literary package that will appeal to a variety of readers across age levels. After engaging in a classic good-magic-versus-bad-magic battle with her mother that fatally wounds her twin sister, 15-year-old Morwenna leaves Wales and attempts to reconnect with her estranged father. She was sent to boarding school in England, and her riveting backstory unfolds gradually as she records her thoughts, feelings, and experiences in a series of journal entries.

Jo Walton’s Among Others is an absolutely charming book. Despite the fact that there are some magical things happening this isn’t a fantasy novel.  It is a novel about fantasy and SF and, if anything, I would call it magical realism. What is charming about this book is not the magic, which is raw, wild and dangerous but Morwenna’s voice and her love of books, reading and libraries.

Morwenna’s story unfolds in a series of diary entries. The year is 1979 and Morwenna has just arrived at and English boarding school. She is a 15-year-old girl from Wales whose twin sister has died in an accident. The very same accident has left her injured and crippled. As we learn in the novel the accident was the result of their evil mother’s doing. The girls tried to stop her from getting more power through magic and that’s how the accident happened.

Morwenna is an outsider at her new school. She is crippled and the only one from Wales. But that isn’t the only thing that makes her an outsider. She knows that she is different. Her mother is a witch. Morwanna only just met her father whose sisters are witches as well, she sees and talks to faeries and she is addicted to reading SF novels. Novels are her consolation.

“It doesn’t matter. I have books, new books, and I can bear anything as long as there are books.”

Books are her escape route but also her way to make sense of the world. Her enthusiasm and love for books is one of the most important elements in this novel. At the boarding school she discovers what libraries have to offer, is introduced to inter library loan which opens the world for her even more and finally she is invited to a SF book club. Once a week she will discuss all her favourite SF and fantasy writers and learn about new books and authors and go on reading her new discoveries in her spare time.

I sat on the bench by the willows and ate my honey bun and read Triton. There are some awful things in the world, it’s true, but there also some great books. When I grow up I would like to write something that someone could read sitting on a bench on a day that isn’t all that warm and they could sit reading it and totally forget where they were or what time it was so that they were more inside of the book than inside their own head. I’d like to write like Delany or Heinlein or Le Guin.

At the book club she meets Tim a gorgeously beautiful boy with a bad reputation. It’s for her to discover whether it is founded or not.

I haven’t read a lot of SF and although I knew the names, I hardly knew any of the books still it was captivating to read about them, to see what elements she picked for her life, what themes, questions and speculations fascinated her.

The voice of Morwenna is very well rendered. This sounds like a young girl discovering the world and new books. We follow her thoughts and see how they develop, how wrong assumptions are corrected, how new things are learned.

The magical parts can be read in many different ways. A sceptical reader could just assume that it is all in Morwenna’s imagination. That grief, sadness and the constant pain she is in lead her to fantasize. It would make sense as well. If you are less sceptical you can just accept the fact, that, yes, she does see fairies and has an evil witch mother. The fairies are very interesting beings and she also mentions that they have nothing in common with Tolkien’s elves. Some of them look like gnomes, others are very beautiful. They are tied to places and seem like some sort of condensed energy.

A part that spoke to me is, the description of Morwenna’s pain. The descrptions were very realistic. The way chronic pain changes, how she tries to handle it, the cures that are provided, the wrong therapy she gets from conventional doctors and how she finally gets better through acupuncture.

Jo Walton lives in Canada but she is from Wales. The differnce between Wales and England is emphasized all through the novel. Half of the French side of my family is from Brittany. The difference to the rest of France is very similar. And you also find a lot of magical beliefs in Brittany. I grew up believing in loup-garous (werewolves) and nobody would have made me go out during a full moon when we were on holidays in Morlaix.

Amon Others is a very unusual coming of age story and I’m glad I read about it on Gavin’s blog (here is her post). I can’t imagine that anyone who loves books wouldn’t be able to relate to the intense love of reading that is capured in this book.