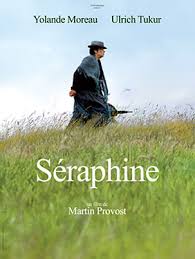 I come from a family of painters. Everything related to painting has always fascinated me. I remember the smell of oil paint from my childhood. Someone was always fiddling around with paint and turpentine, heavy cigarette smoke in the air… Creativity, inspiration and spirituality are some of the most important things to me. All this and much more is captured in this heartbreaking movie.

Séraphine is one of the most tragic movies I have ever seen. It is based on a true story, on the life of the painter Séraphine de Senlis, cleaning woman, artist, visionary, madwoman. But first, and most touchingly, a vulnerable human being. The actress Yolande Moreau does an absolutely outstanding job in this role. Ulrich Tukur starring as the famous German art collector Wilhelm Uhde is equally good.

In 1914 Uhde rents an apartment in Senlis, some 40 kilometers from Paris, to recover from his stressful life. The cleaning woman his landlaydy hires for him startles him at first. She is very rough and hardly speaks a word, seems completely uneducated. Séraphine is pitied by all and hardly taken seriously. People think that she is slightly mad and very odd. During the days she cleans houses and washes people’s laundry, at night she paints and sings. She produces her own paint, mixtures from blood, wax, juices and other substances. When Uhde sees one of her paintings in the appartment of his landlady, he is astonished. To him, who collects the work of the so-called Primitives,  this is the work of a genius and he can hardly believe it has been painted by someone with no schooling. He asks her to paint more for him and to improve herself. The paintings she produces from now on are getting better and better but when the war breaks out, Uhde abandons Séraphine and flees back to Germany.

He doesn’t go back to Senlis for almost twenty years but when he comes back he finds Séraphine again. She is by now totally impoverished but still paints the most magnificent pictures. He helps her sell them and in a short time she makes a lot of money that she spends without restraint until the second world war announces itself through a huge economic crisis. Uhde looses a lot of money and can no longer support Séraphine. But worst of all, the big exhibition in Paris, to which she has been looking forward to for years, will not take place.

Séraphine doesn’t recover from this shock and goes mad. The scene in which she walks through the village, barefoot and in a silken marriage dress is haunting. She is finally  taken to an asylum where she will stay until her death.

Séraphine’s story is sad but also very mysterious. Where did a simple woman without any background or education take her inspiration from? How did she learn to paint? Séraphine said that the virgin Mary inspired her, she sounded like a visionary, not unlike Hildegard von Bingen who painted too.

She also seesm to have communicated with nature. Many of the visually most powerful scenes of the movie show Séraphine walking over fields, hugging trees. This is her way to connect an refuel.

Séraphine is a thoughtful, almost meditative movie, heartbreaking, moving and utterly fascinating. It is slow-paced and takes its time to unfold.

There are so many mysteries in the world. Art, creativity, inspiration and spirituality are some of the most powerful ones. Thanks to movies like Séraphine, we are reminded of this.

For those who want to see more of Séraphine de Senlis’ paintings, I attached this interesting documentary.