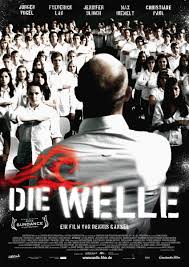 Gansel’s movie Die Welle or The Wave is based on a true event that took place in Cubberley Senior High School in Palo Alto, CA, in March/April 1967. The movie is set in present-day Germany which makes it much more powerful. It’s not a flawless movie but it is highly watchable for many reasons notably a outstandig performance of one of the very best German actors, Jürgen Vogel. I simply love this guy. I have never seen him in anything bad but I am afraid he is not widely known outside of Germany, unlike the internationally acclaimed Thomas Kretschmann (King Kong), Till Schweiger (King Arthur, Inglorious Basterds)  and the latest addition of German actors to the Hollywood pantheon, Michael Fassbender (Inglorious Basterds) who is  going to star as Mr. Rochester in the upcoming Jane Eyre.

Gansel has already done an outstanding movie on the Nazi elite training camps, NaPolA aka Before the Fall, so I was pretty sure this couldn’t be bad.

The Wave was an experiment conducted by a teacher  in the US that went very wrong. He wanted to prove to his pupils, who were saying that something like the Third Reich couldn’t happen anymore nowadays, that they were wrong. As said before, to take the same premise and set it in present-day Germany was a great idea. It’s a creepy movie.

Rainer Wenger (Jürgen Vogel), a much liked  teacher (he is anti-authoritarian, young, cool) must lead a project week on autocracy although he wanted to teach anarchy. He is pretty bored by his assignment but he understands soon that the kids in front of him think that totalitarianism, dictatorship and despotism couldn’t exist anymore, that the 3rd Reich wouldn’t be possible in our time. This gets him thinking and he decides to show them that they are mistaken. It is extremely subtle how he proves the contrary and that is why it is so creepy. Watching this movie you think it would not only work in the movie but could really be achieved in real life. The methods Wenger applies are not much different from those used by sects. He first shows them their weaknesses, then strengthens them, tells them how important it is to stick together, that it is only as a group that they are strong… Soon they follow his every word, wear a uniform, want to greet each other a special way… It is not long before they will ostracize those who do not comply. And then it gets out of hand. The kids forget that this is a school project and that they might be taking part in an experiment. They end up taking  it far too seriously and so does the teacher after a certain point.

I really liked the topic of the movie, the way it was done is entertaining and thought-provoking at the same time. And the acting is great. Die Welle encourages you to question assumptions about freedom, individuality, independence, and responsibility. The end is exaggerated, I think, I haven’t read the book or done much research. Die Welle also explores how much power teachers and other authoritative figures have over their charges who admire them and how easily they might be tempted to abuse it.

I would say, this movie is another example of the fact that Germany offers some of the best filmmaking there is.