I never thought I would love The Diary of a Bookseller so much. I discovered Shaun Bythell ‘s book on Jen Campbell’s YouTube channel. She knew him because she interviewed him way back when she wrote The Bookshop Book. Possibly he was also a contributor to her Weird Things Customers Say in Bookshops. Shaun Bythell is the owner of Scotland’s largest secondhand bookstore. His shop has over 100,000 titles. He’s famous for being more than a little cranky, a bit like Dylan Moran’s character in the TV series Black Books (if you haven’t watched that yet, do yourself a favour and watch it. It’s so, so funny). If you read the diary, you’ll agree, that he has reasons for being cranky. My goodness. It’s unbelievable what some customers do or say.

Initially, Shaun wrote this book for himself, to make sure, he didn’t forget what was going on in his life and his book shop. I’m glad he decided to make this public because it’s fascinating, charming, enlightening, and sobering, all at the same time. I learned many things, I had no idea about or didn’t know that much about. 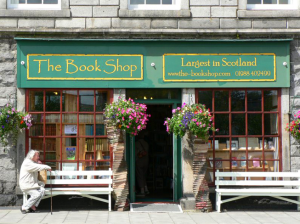 Shaun Bythell’s shop, called The Book Shop, is located in Wigtown, Scotland. Wigtown, is the Scottish counterpart of the Welsh Hay-on-Wye. It too has numerous book shops and hosts book festivals that might be smaller than Hay-on-Wye, but sound just as vibrant and interesting.

Every day, Shaun wrote down how many online orders he got (and books he found in his labyrinthine shop), how many paying customers he had and how much he earned. It’s amazing how much these numbers actually convey. You realize quickly, that this is a very hard business and sales aren’t high.

He also describes all the many things that are part of his shop like buying new stock, assessing libraries that are for sale. He writes about his staff, his cat, his girlfriend, friends, and customers – nice, weird and rude ones alike.

His sense of humour is great, on the acerbic side, and his comments on staff and customers make for entertaining reading.

Although it’s funny and fascinating, the book has a melancholy side. The reader can’t shake off the feeling to read about a dying trade. Shaun Bythell may very well shoot a kindle and hang it up on the shop’s wall, he may curse amazon . . . all that won’t change a thing— people aren’t willing to pay much for used books, unless they are very rare. The book also ends on a melancholy note as he describes in the epilogue what has happened to him and friends and customers after he finished his diary, which covers 2014.

Some of the entries are a few pages long, others very short.

An elderly customer told me that her book club’s next book was Dracula, but she couldn’t remember what he’d written.

Most entries are about the shop and book selling/buying but there are many that are about Shaun’s life. Those are just as entertaining.

Here are some of the things I found interesting:

Even though Bythell’s life doesn’t sound easy – customers can be annoying – book boxes are often far too heavy – the shops’ always cold – it still sounds charming and in many ways like a lot of fun. After all, he’s his own boss, is surrounded by books, meets some great people through the shop and the festival, and there’s always the possibility he might find some hidden treasure somewhere in a library.

I thoroughly enjoyed this book. It gives insight and entertains and put me in the mood to travel to Wigtown some day.