Edda Ziegler’s fantastic book on German women writers under National Socialism Verboten – Verfemt – Vertrieben (Forbidden – Ostracized – Banned) was easily my favourite read this year. I hope that some English language editor will buy the rights to this book and have it translated. It’s an introduction to the most prominent German women writers under National Socialism, a detailed historical account of the times and an analysis of publishing history.

Edda Ziegler is a professor of German Literature and non-fiction writer. Unlike some academics she manages to write in an engaging way and still offers a world of information.

The book is divided into 7 chapters which are dedicated to different aspects of the life of women writers before and after National Socialism. Each chapter contains stories of different writers and at least three more elaborate biographies as examples.

Chapter 1 looks at the so-called Asphaltliteratur, just before 1933. Vicki Baum, Mascha Kaleko and Irmgard Keun are the chosen examples. Asphaltliteratur was a term applied by the Third Reich to denigrate modern literature “without value”, meaning not popular and nationalist enough. The three writers were successful before the Nazis came to power and stayed relatively successful and famous until today. Vicki Baum fled to the US very early where she led quite a glamorous life. These women were considered to write “Unterhaltungsliteratur” – literature of escapism – because they wrote about the life of women. Edda Ziegler shows very well, that it was far more difficult for German women to be taken seriously as writers as for men. The situation was very different in England or the US.

Chapter 2 is dedicated to those writers whose books were burned by the Nazis, like Annette Kolb, Erika Mann and Gertrud Kolmar.

Chapter 3 looks into the ways that lead women into exile. Prominent examples are Else Lasker-Schüler, Grete Weil, Veza Canetti and Hermynia Zur-Mühlen. This was one of the most gripping chapters. Many writers dedicated themselves to help others flee. There are some astonishing acts of heroism mentioned. Varian Fry, an American journalist, is mentioned quite often. Together with German authors, like Lisa Fittko who wrote a memoir about this time, he helped numerous authors to flee from France to unoccupied Morocco and the US and the UK. After 1933, many emigtared to the Netherlands and France but when the war broke out that wasn’t safe anymore. Some emigrated to the UK and the US, Anna Seghers and some other communist writers went to Mexico.

Chapter 4 is dedicated to life in exile. Gina Kaus, Hertha Narthorff and the women around Bertold Brecht (Elisabeth Hauptmann, Margarete Steffin, Ruth Berlau) illustrate this aspect. Some authors like the Manns were able to make the most of life in exile and there were some interesting author’s colonies in the US.

Chapter 5 tells about the trauma for writers to lose their native language. Anna Seghers, the writers in the concentration camp Gurs and Nelly Sachs are mentioned in-depth. Erika Mann was one of the rare examples who started writing in English but many of the others struggled incredibly. And even if they managed after a while, it was hard and the loss was always felt.

Chapter 6 contains examples of women who went into an interior exile. Ricarda Huch and Marieluise Fleisser are the two examples. These women simply withdrew from life around them and lived apart and on their own.

Chapter 7 which is called “estranged” looks into life after 1945. Some women returned to Germany, many stayed abroad. The biographies of Hilde Domin and Rose Ausländer exemplify these two possibilities.

The book is written in an engaging way, many of the biographies are incredibly tragic but most are testimonies of astonishing resilience. Edda Ziegler has managed to get rid of the myth of the helpless German women writers. Most of her biographies show that women did cope far better in exile than men. They were more ingenious than their male colleagues. Contrary to what was generally believed, far less women committed suicide. Even before 1933 women writers were always forced to take care of their families,to assure that everyone was fed and clothed, they were used to survive writing and working in parallel. They even started to sew and type to make a living without making a fuss like so many of their husbands or partners.

The most tragic examples for me were those who were already elderly when the Nazis came to power and those who were incapable of learning another language. Even some women who emigrated to Palestine encountered these difficulties.

Sure, some women didn’t survive, the interior exile could become the last step before madness and a few women committed suicide but, overall, I think this book carries a message of hope. It shows us that women are capable of being active, creative and to survive under the most dreadful circumstances. Needless to say that I ended up with a long list of books I’d like to read. A few have been translated and some of those I’d like to mention here. 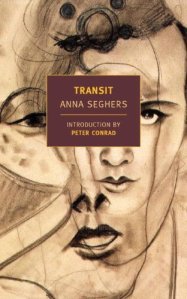 Anna Seghers who is famous for The Seventh Cross, wrote a book while she was in transit in the South of France. It is called Transit and seems to be one of the most accomplished accounts of this painful chapter of the life of those who left Germany. Fellow writers like Erich Weiss who tragically committed suicide in Paris when the Germans occupied the city are mentioned. The book had a somewhat turbulent history as Seghers who returned from exile to live in East Germany had added some criticism of communism. Transit will be reissued in May 2013 by the NYRB.

Hilde Spiel’s novel The Darkened Room (Lisas Zimmer) sounds like one of the most interesting ones and I hope to be able to read it soon. Set in New York it tells the story of various immigrants who cannot or do not want to return to Germany. Hilde Spiel was Austrian and spent the war years in London. She has published memoirs which all seem available in English as well.

Before ending this lengthy post I’d like to mention two very interesting parts which were dedicated to the wife of Elias Canetti, Veza Canetti, and the women around Bertold Brecht like Elisabeth Hauptmann, Margarete Steffin and Ruth Berlau. These were very enlightening pieces as they showed those men in a less than favourable light. Brecht really didn’t apply any socialist ideas while he was reigning over his harem. While he had a sexual relationship with all of the women in the beginning of their relationship, he soon abandoned each woman for another one. The weird thing is, that they all stayed and worked for him. A lot of his writings should be attributed to the one or the other woman around him. Exile reinforced this dependency. Brecht preached “non-possession” and equality but this meant, de facto, that they all contributed to his work without any rights or without ever being thanked and mentioned.

I could write much more but I will stop here. I’ve mentioned a few of the important names, those who read German will easily find their books and some may be available in English too. The novels of Irmgard Keun and Vicki Baum, both successful then and now, are still available and highly recommended reading.