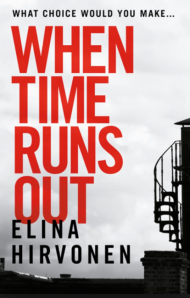 I’m glad I stumbled across this book on Raven Crime’s blog at the end of last year because I liked it so much. One could say it’s less a crime novel than a novel about a crime and a study of the ways we deal with the many global problems we’re facing. Ultimately, it’s also an exploration of family dynamics and responsibility.

The story is set in contemporary Helsinki and Mogadishu and told from several different points of view. Laura, an expert in climate change, Erik, her husband, and their son Aslak live in Helsinki. Their daughter, Aava, is a doctor in Mogadishu, where she’s helping the poorest of the poor.

Right from the beginning we know that something’s wrong with Aslak. He hardly talks to his parents, doesn’t always show up when he’s invited, doesn’t seem to work. He’s drifting. While it worries his mother, it doesn’t come as a surprise as he’s always been difficult. Laura isn’t sure, where that comes from and in several chapters, telling the back story, she tries to analyze why Aslak is the way he is. Should she have stayed a single woman and not had children, like she originally intended? Was Aslak born different? Or is his character the result of a traumatic experience? As a young boy, he vanished for several hours and nobody ever found out what happened to him.

When a young man begins to open fire on passers by, in the center of Helsinki, there’s no doubt who the shooter is.

While the book is about the reasons for such a drastic act, it’s also about more than that. Each of the three major narrators – Laura, Aslak, and Aava – respond to the world around them, to consumerism, overpopulation, animal abuse, climate change and many other global problems in a very specific way. I absolutely loved the way Elina Hirvonen explored the very different ways to find solutions to global crises.

The character I found most interesting was Aava. In an attempt to help the poorest people of Somalia, she risks her life and health. Very often with very little success. At times, she manages to save a child, only to see it die a few weeks later of some ailment that wouldn’t be of any consequence in Europe. The struggle and futility of it all often lets her lose faith. According to a short biographical notice I found online, Elina Hirvonen has travelled a lot and knows Africa very well. One can sense that. The parts set in Africa felt just as authentic as those set in Finland.

As I said before, the book is about a crime. About why a young person would commit it and how this will end for him and his family. One of the central themes is responsibility, responsibility for children, other people, animals, the planet. It shows the many contradictions we face, how, even when we try to do well, we might still fail on some level. And, it also shows that it’s often easier to help strangers than your own family members, easier to communicate with someone one hardly knows than with a brother, mother, sister or husband.

When Time Runs Out is an engaging, thought-provoking book that tackles major themes of our time and looks at them from different points of view. And it’s also an analysis of the struggles of family life, missed communications, missed opportunities. It’s biggest strength however, is that it allows us to understand people whose choices are very far from those we make. Another reason this was so engaging and readable is the structure and the narrative techniques. It’s so well constructed and balanced.

It’s not often that a crime novel would make an excellent choice for a discussion group – this one certainly would.