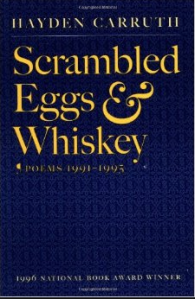 I discovered American poet Hayden Carruth on subrosa here. The poem Sigrun posted was so poignant that I ordered one of Carruth’s collections Scrambled Eggs & Whiskey. I haven’t finished the collection yet and I can’t say that every poem speaks to me but some are stunning.

California is a poem he dedicated to Adrienne Rich. I particularly liked the third stanza. The poem was probably written in the 90s but what he expresses is just as valid today. Maybe even more so.

for Adrienne Rich
To come again into the place of revolutionary
thought after years in the wilderness
of complacency and hard-eyed greed
and brutality
is extraordinary. A’s kitchen
in Santa Cruz
isn’t greatly different from her kitchen in
West Barnet in the old days,
small interesting ornaments here and there,
many good things to eat—
and how ideas flew from stove to table,
from corner to corner. In Santa Cruz
after twenty-odd years it was the same. Tolstoi said
the purpose of poetry is to provoke
feeling in the reader, to “infect” the reader,
he said,—and so to induce a change,
a change of conscience
that may lead to a change in the world, that will
lead to a change in the world!
How can poetry be written by people who want no change?

To be reconciled after so long,
in sunshine, among Latino voices. A. showed me
where earthquake two years ago had changed Santa Cruz
and how the people were rebuilding, making it better. Had she
been frightened? Of course. Would she move away?
Never. Here earth itself gives us the paradigm.
And the great ocean hurling its might always thunderously against
the land at Half Moon Bay is our measure
of flux and courage
and eternity.

We drove among hills, redwood and eucalyptus,
dense growth, the richness and ramifying intricacy
of the world’s loveliness, and asked
what would be left
for our grandchildren, already born, when they are
as old as we? No longer do we
need an insane president to end us
by pushing a button. People
need only go on living as they are, without change,
the complacent and hard-eyed
everywhere. At the airport
after dark
among hard lights
with the massive proportions of human energy
surrounding them, two old people
embraced in love of the injured and poor, of poetry,
of the world in its still remaining remote possibilities,
which were themselves.