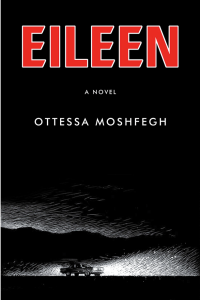 I finished so many novels recently that I will never be able to review them all. That’s why I decided to do a post with shorter reviews. It doesn’t mean that the books weren’t as good as other books I’ve read. Just bad timing review-wise. I’ve added some blurb quotes at the beginning. Either as a contrast to what I wrote or to emphasize my opinion.

Fully lives up to the hype. A taut psychological thriller, rippled with comedy as black as a raven’s wing, Eileen is effortlessly stylish and compelling. – Robert Douglas-Fairhurst, The Times

First up is Ottessa Moshfegh’s Eileen. The tale of a crime that is instrumental in freeing the main character. Now this is a book I’m not likely to forget. The writing is so assured and strong. The voice of the narrator is original and the way the book was told worked remarkably well. The narrator, who was once called Eileen, is now an older woman, looking back at something that happened a long time ago. Back then she was an insecure woman who lived with her alcoholic father in a very dirty, sordid home and worked in a boy’s prison. When the new counselor, the glamorous Rebecca, arrives at the school, things first get very exciting for Eileen and then they get out of control. Eileen is a very unpleasant character. It’s not always a joy to be inside of her head. She has perverse fantasies and some of her hidden habits are really gross. The reasons why I enjoyed this taut noir so much, is that the older Eileen constantly adds information about her future life and because we sense that things will go wrong, we wonder how she managed, in spite of everything we are told, to have an almost normal life. I also enjoyed that it’s never really clear whether she’s totally unreliable or just completely deranged. Ottessa Moshfegh has been on my radar for a while. Many of her short stories have been highly praised. She certainly is a very assured and very talented writer. I’m really keen on reading more of her stories and hope she’ll write another novel soon

If you’d like a more detailed review here’s Guy’s post on Eileen. I discovered the book on his blog.

‘The Loney is not just good, it’s great. It’s an amazing piece of fiction’ Stephen King

The Loney won the Costa Prize in 2015. I received the novel as a Christmas gift. I’d never heard of the book before but the person who gave it to me, knows that I like dark and gothic tales. I’m really glad that I’ve read it but not entirely sure I liked it. The atmosphere is amazing. It’s set in a bleak desolate part of England, near the coast in Lancashire. The Loney is a stretch of land that gets cut off and turns into an island during high tide. Getting lost between the land and the sea is very dangerous. The tide comes in quickly and surprisingly. The narrator is an older man. The story he tells takes place when he’s still a young boy. For a long time it’s not clear if what happens in the book is just the result of religious fanaticism or whether there is really a haunting. I found that interesting but wasn’t too keen on the ending. The story takes place during Easter. The narrator’s parents, especially the mother, are fanatics. They hope that they will be able to cure the narrator’s older brother through prayer. The mother is a really chilling charcater and sounded a lot like Jeannette Winterson’s mother.

What didn’t work so well was the subdued tone. The writing is deliberately old-fashioned, but takes, in my opinion, too much time. The atmosphere is spooky from beginning to end; the mood depressing, but there’s no real climax. It’s very well written though. I’ll keep an eye out for other books by this author. This was Andrew Michael Hurley’s first novel.

“A book of great moral maturity, beautifully alive to the fragility of happiness and all forms of violence… Everyone should read Saturday… Artistically, morally and politically, he excels” (The Times)

I know that a lot of people love Ian McEwan. Many even think he’s an outstanding writer. While I find him entertaining, I don’t really think he is all that good. The whole time I was reading Saturday I kept turning the pages quickly, which means I was captivated by the story, but at the same time I couldn’t help but think that this was a lot like Grey’s Anatomy in book form. Captivating but also a bit trashy. Saturday tells the story of one day in the life of neurosurgeon Henry Perowne. The details are so minute that it actually made me laugh. You can sense that McEwan did a lot of research but did he have to pack all of it into his book? I found this very heavyhanded. Almost like the novel of a beginner. Now, the neurosurgery part was actually OK. Not the most fascinating topic for me, but OK. But since he wanted to add other subjects, we get a lot of information on literature—one of Perowne’s kids is a poet, and so is his father-in-law— and information on music— his son is a musician. After a while, I felt like being invited to one of those boring dinner parties where everyone has a “great career”, reads the latest books, has seen the latest movies and talks a little bit about politics and endlessly about food. There’s even a recipe in this book. Ha! Perowne and his entourage are the kind of people I’ve seen referred to as “Champage Socialists” here in Switzerland.

At the beginning of the day, Perowne thinks he witnesses something horrible. He’s unsettled. Later, he really experiences something terrible. It all left me completely cold. I’d lost patience with the character. All in all, yes, I was entertained. In a way it felt like spying on someone or like living someone else’s life for a day. Nonetheless, I can’t say I found it great or that it’s a must read.

Have you read any of these?