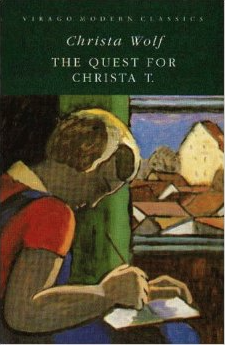 I’m fond of paper weights. Especially those with a delicate glass ornament inside. Now imagine such a paper weight. Maybe there’s a fragile, colourful butterfly trapped in its centre. Take that paperweight and smash it against a wall. What you’ll be left with are shards of glass, splinters, some larger fragments, and maybe half of the butterfly will still be intact. That’s exactly what Christa Wolf seems to have done when she wrote the The Quest for Christa T. – Nachdenken über Christa T. What the narrator displays, is the fragmented story of her friend, who died too young, leaving behind a pack of notes and letters, and people who remember her, or think they remember her. The narrator sets out to capture her friend, an elusive woman, and piece together the story of her life and their friendship.

Remembering is complicated. We add, we subtract. Our memory plays tricks on us. The narrator goes back and forth between what Christa T. wrote down and what she thinks she remembers. The notes are not exhaustive. A lot has been left out. In order to capture her friend, the narrator deliberately adds, exaggerates, or embellishes.

Like the smashed paper weight, the story we read has beautiful broken parts; some are pieced together easily, others stay fragments.

The story has one chronological line, from the girls childhood, to the death of Christa T., but each chapter jumps back and forth on smaller timelines.

I really liked reading some of the passages of this book, but most of the time, I found it tiresome. And I wasn’t really interested in Christa T. I didn’t get what was so special about her. The narrator mentions rebellion and nonconformism, but on the outside her life didn’t seem rebellious or nonconformist. Are we meant to believe that having doubts, questioning the regime of the GDR was a rebellion in itself? I suppose so.

The most interesting aspect of the novel is how it shows the elusiveness of memory and of understanding another person. That’s quite well captured in the title which also evokes a central image that we encounter again and again. Sadly, the complex meaning of the title is lost in translation. “Quest” is much more active than the German “Nachdenken” – which means to think about something. A quest is a search, thinking however, can be done without moving. And then there’s the element of “nach” – which means “after” . In the image I mentioned before, we see Christa T.’s back, moving away. Very often we have the impression, all the narrator sees with clarity, is Christa T. walking away, disappearing. This is alluded to in the word Nachdenken – which sounds a bit like following someone in your thoughts.

As a whole, this book was frustrating but the different shards and pieces were beautiful. A lot is well said, subtly and brilliantly described. Many fragments are moving, especially those that deal with the loss of Christa T. The end is so sad. Not only because she is ill and dies but because they all lie to her. Doctors and friends alike. It doesn’t really allow them to say goodbye.

Another reason why I found the book frustrating is because it is muted, toned down. It seems to contain a lot of deliberate confusion. Maybe because Christa Wolf couldn’t write an unambiguous novel about a rebellious woman, without getting into trouble. Probably this might have been one reason for choosing such a fragmented, modernist approach.

I will return to Christa Wolf again but not very soon. I saw some reviews of this book. Three were more enthusiastic: HeavenAli here and Kaggsy’s Bookish Ramblings here Tony’s Reading List here. Booker Talk shares my frustration.