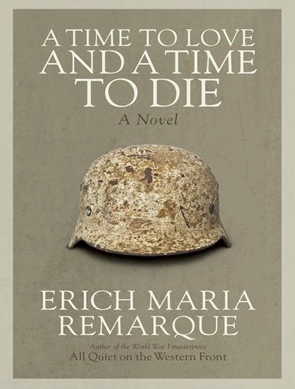 A few years ago, I went through a Erich Maria Remarque phase, reading several of his novels, one after the other. I don’t think there are many writers who manage not only to capture the horrors of war but its complexity. Nothing is really black and white during a war and so Remarque’s characters are never black and white. He’s also one of the rare writers who depict the soldiers in the field and the people at home. Usually however, the books either focus on the home front or on the front. A Time to Love and a Time to Die – Zeit zu leben und Zeit zu sterben is the first I’ve read in which both settings are equally important.

The book starts in Russia, at the Eastern Front, toward the end of the war. The Germans are pushed back; their losses are heavy. Nobody thinks they will win the war but to say so would be an act of treason.

We are introduced to a group of soldiers – one of them the main character Ernst Gräber – who bury an officer and get ready to shoot a group of Russian partisans. Fighting is heavy, the winter’s still raging and morale is at an all time low. The soldiers are a mixed group. Some are Nazis, some just enjoy cruelty, others are fed up with it all.

Ernst Gräber hopes that he will still be granted three weeks of vacation. He hasn’t heard from his parents in a while, hasn’t been home in two years. Because the fighting is so intense, he’s convinced, he won’t be allowed to travel home, but at the last minute, he’s informed that he can go after all.

Ernst had been looking forward to some creature comforts— warm water, fresh clothes, a bed, and his mother’s cooking. He won’t get none of that. He won’t even find his parents. All he finds is their bombed out house and some information that lets him hope, his parents are still alive and have been transported to the country.

In the following weeks Ernst meets old school friends: Elisabeth, a young woman, he falls in love with and Oscar Binding who is a district leader. He also meets an old teacher who has been fired and lives in constant fear of being brought to a camp. Unlike most of the people around him, with the exception of Elisabeth, Ernst doesn’t think the bombing is unjustified. Even before, still at the front, he began to question the war. Was killing in the name of a war and especially in the name of a misguided leader not plain murder? His conscience tortures him constantly. People are hungry but because he knows a district leader who has hoarded food, he and Elisabeth are able to eat and drink as much as they want. Is that OK? He’s also shocked to see how many people readily denounce their neighbours.

This question about when killing becomes murder is the central question of this novel. And it is was because of this question that the book was censored in Germany. Until recently the English and the German book were very different. Remarque published his novel in 1954, but in order to publish it in Germany, the message had to be toned down, in places even altered completely. And the graphic elements were deleted. In the 50s, nobody in Germany wanted to think about guilt or that the soldiers might not have been heroes but in many instances just killers. Remarque wasn’t happy about the alterations but he accepted them because he wanted to see his book published. There was still a profound anti-war message in the book, but it didn’t point fingers. And the end carried a very different, anti-Russian message. However, the translations that came out at the same time, were all based on the original text.

I really liked this book. It had graphic moments but it had also moments of incredible, almost surreal beauty like when Ernst discovers a tiny restaurant with a vast garden. It’s a small oasis in the middle of the destruction. Remarque uses descriptions of ruins and nature to show that horror and despair, and hope and joy coexist. At least – to some extent. Reading about destruction of the cities is quite awful. There’s one description of a house after a bombing, of body parts and dead people that was almost unbearable.

Remarque is very good at characterizing minor characters and there are many memorable characters here. As for the love story—it is touching, but never sentimental.

I’m glad I liked Remarque just as much as I did years ago and I know, I will read more of him in the future.